2021 marks the 140th anniversary of the beginning of public education in the community of Edmonton.

To commemorate this anniversary, Historic McKay Avenue School, home of Edmonton Public Schools Archives and Museum, is launching a project called “140 Years 140 Facts”.  Over the course of the year, we will be posting 140 facts about what is known today as Edmonton Public Schools. Follow us on Instagram, Twitter and Facebook to receive the latest facts! 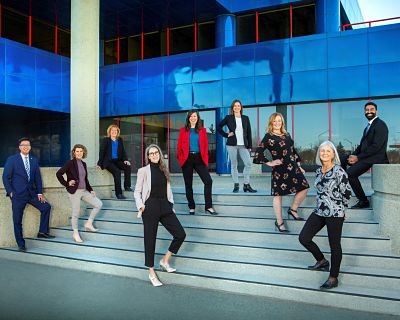 Today’s fact is number 140 in our “140 Years 140 Facts” project. As our first post of the project was the first Board of Trustees, elected in October of 1881, we thought we would finish with a photo of the current Edmonton Public Schools Board of Trustees elected on October 18 of this year. We would like to congratulate each of the Trustees on their election and to say how much we look forward to having them lead us into the beginning of Edmonton Public Schools next 140 years. 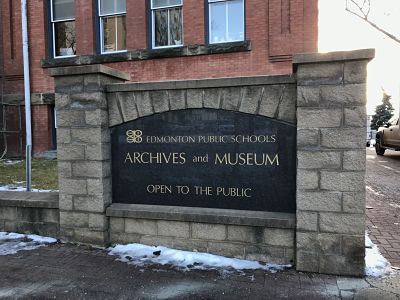 On June 30, 1983, McKay Avenue School was closed as its enrollment had dropped to 59 students. Demolition of the building was never seriously considered as it had been designated a provincial historic site in 1976, having been the home of the first legislature of Alberta in 1906 and again in 1907. Pleased with public response to restoration of the 1881 Schoolhouse a year earlier, Edmonton Public School Board Trustees approved a motion to create an archives and museum in the building. 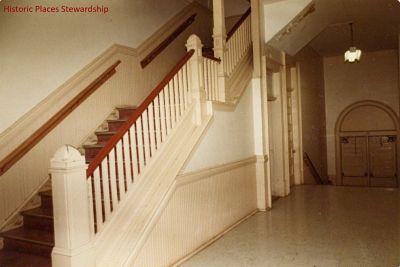 It would take far too long to give all the details of the almost five year process that resulted in the official reopening of Historic McKay Avenue School on April 29, 1988. Some of the highlights were: 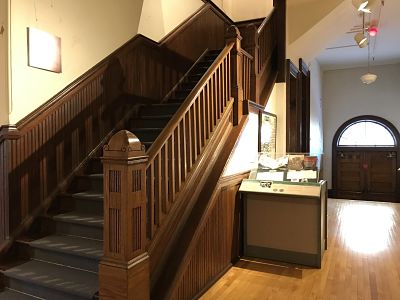 The majority of the restoration costs were covered through municipal, provincial, and federal grants as well as corporate and private donations. Students from a building construction class at W. P. Wagner School under the guidance of teacher Ron Massing restored two classrooms on the second floor as part of a work-experience project, saving a substantial amount of money. 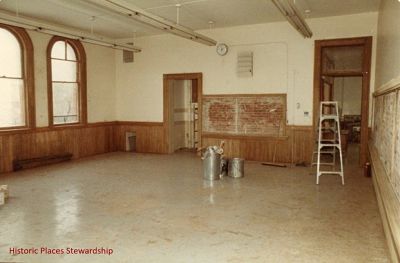 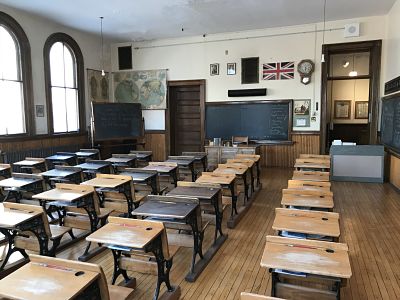 In 1984 a great deal of work was accomplished by the hiring of students through Canada Works Projects and unemployed tradesmen through a federal Job Creation Project. Total matching grants of almost $900,000 was obtained from Alberta Education in 1986 leading to the hiring of an architect and contractor to complete the project. Restoration by Pentagon Construction began in January, 1987 and except for one pleasant interruption, continued for 14 months. On September 18, 1987 Governor-General Jeanne Sauve, while on a visit to Edmonton, participated in an outdoor rededication ceremony where she placed a time capsule above the original cornerstone laid by Governor-General Minto in 1904. 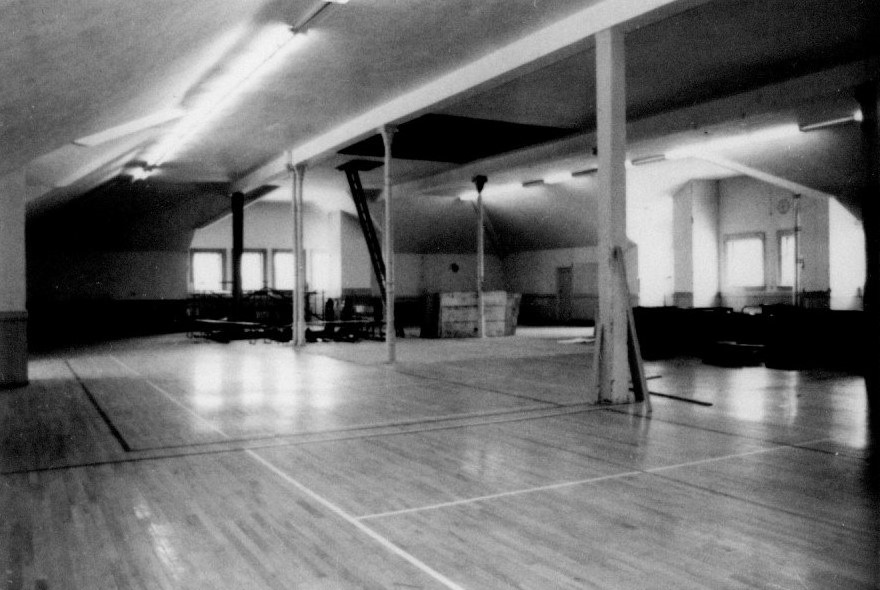 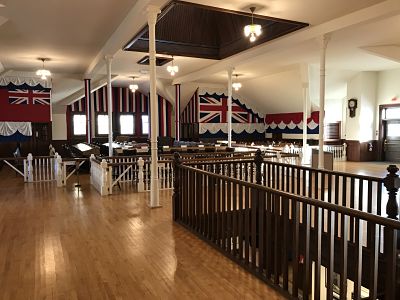 On April 28, 1988 a special session of the Alberta Legislature took place in the newly restored Legislative Gallery on the third floor of Historic McKay Avenue School. This was to commemorate the 82nd Anniversary of the First Legislature of Alberta held at Mckay Avenue School.

On April 29, 1988 Edmonton Public School Board Chairman Dick Mather was Master of Ceremonies in an official ceremony for the re-opening of Historic McKay Avenue School. The main address at the ceremony was delivered by Her Honour, Helen Hunley, the Lieutenant-Governor of Alberta. 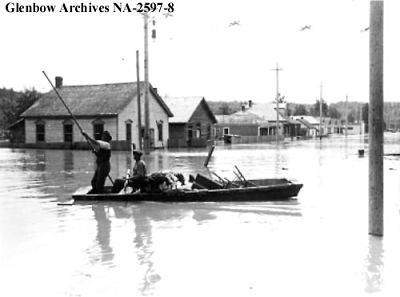 Following the construction of McKay Avenue School in 1904, the original Edmonton School was moved into the river valley to 9647-100 Street. It survived the flood of 1915 (Image 1) and remained at this location for over 70 years. It became the long-time home of the Mawhinney family in 1919. 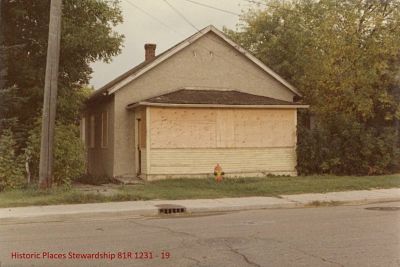 In 1980, the City of Edmonton purchased the home from the Mawhinneys. (Image 2 was taken at about this time.) The following year, this historic building was returned to Edmonton Public Schools for a token $1. 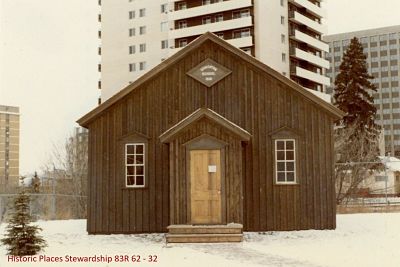 After much debate, it was decided to return Edmonton’s third oldest existing building to its original site. It now sits on the grounds of Historic McKay Avenue School within about 100m of its original location. After extensive restoration, the 1881 Schoolhouse (Image 3) reopened on September 25, 1982. One month later, on October 25, the schoolhouse resounded once again with the voices of students as teacher Michael Kostek welcomed Grade 5 students from Braemar School for a taste of education in early Edmonton.

The 1881 Schoolhouse continues to be a favourite field trip of students from Edmonton Public Schools and other jurisdictions. To date, just under 118,000 students have attended this student program.

After a pause at the beginning of the pandemic, we have been able to continue offering a late 19th century educational experience using early 21st century technology! 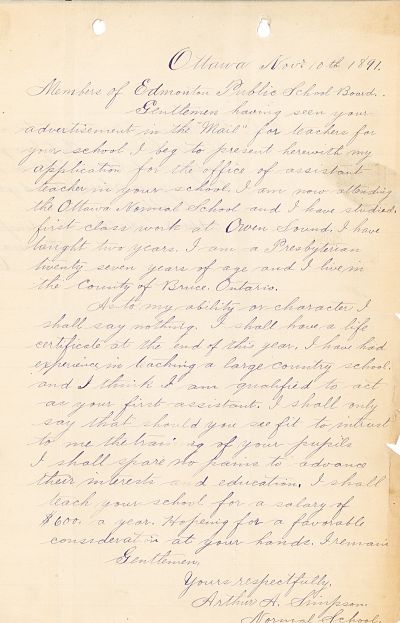 Today’s image shows the oldest teacher application that we have in our records. It was made by Arthur A. Simpson on Nov 10,1891. He was applying for an assistant teacher position and asking for an annual salary of $600.

In the early years, teachers for Edmonton Public Schools were frequently required to reapply for their position. At this time they would also indicate the salary that they desired. In February of 1886, Richard Secord, who had been the teacher in the Edmonton School for almost 3 years and was earning $75 per month, reapplied for his position and asked for a salary of $80 per month. The job was given to William Carson who had submitted an application with a request for $75 per month. 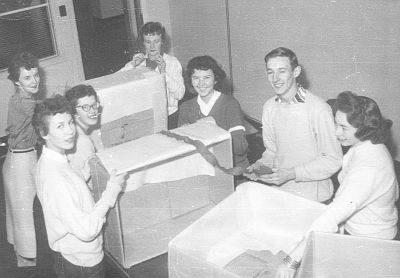 During the 1950s and ‘60s, a few weeks before Christmas, participating Edmonton high schools would collect gifts from the student body ranging from foodstuffs to clothing to toys. These items would then be wrapped in white tissue. Students would also hold fundraisers to collect money to purchase perishables to add to the Christmas hampers. The gifts would be delivered by the students to needy families in time for Christmas. This annual Christmas event was called the “White Gift Campaign.” Pictured are students from Victoria Composite High School (Victoria School of the Arts) wrapping gifts in Dec 1958.