Every October we acknowledge Custodial Appreciation Day. Pictured is a tender submitted for a custodial position with Edmonton Public Schools in 1898.

We would like to give a well deserved “thank you” to all the custodians of Edmonton Public Schools who work so hard to keep our schools clean and safe for our students and staff.

When the third classroom was added to the original schoolhouse in 1891, the Board showed their appreciation to the custodian by raising his salary to $100 a year!

Today, both Abbott School and Velma E. Baker School are named in honour of school custodians. Abraham Abbott was a long time custodian for the Beverly School District, which became part of Edmonton Public Schools following the amalgamation of the town of Beverly with the City of Edmonton in 1961. Velma Baker was a custodian for 25 years with Edmonton Public Schools and the first female president of CUPE local 474. 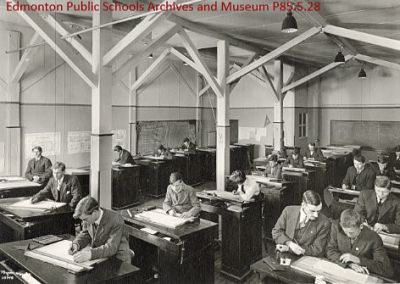 The Subject of Drafting

October 4 is World Architecture Day. Throughout history, the first step in creating a work of architecture has been the drafting of a plan. Drafting as a subject began in Division High Schools in 1947, however, it was taught even earlier in Edmonton Technical School. Our first picture is a drafting class at Edmonton Technical School circa 1913 - 1923. 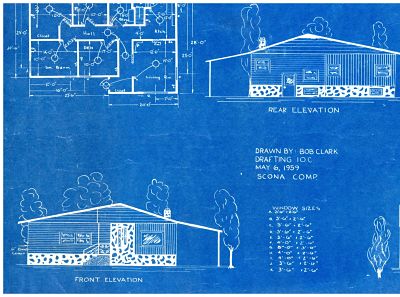 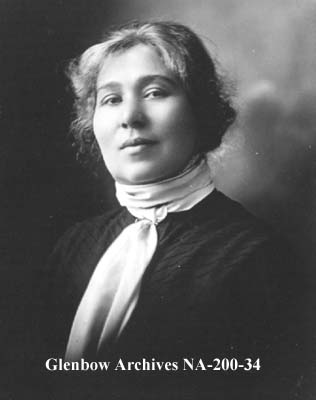 In Canada, Women’s History Month is celebrated in October. During the month we will have several posts about women who have been trailblazers and are in some way connected to the history of Edmonton Public Schools.

When Bessie Nichols was elected as a Trustee of Edmonton Public Schools in 1912 she became not only its first female trustee but the first woman elected to public office in Alberta. Unfortunately, Miss Nichols was suffering from poor health at the time and it is unclear how many Board meetings she was actually able to attend. In 1913 she underwent two operations at the Mayo Clinic and in May of that year mailed her resignation to the Board who decided to grant her a leave of absence instead. It is believed she married in 1914 after her two year term ended. Bessie Nichols School, opened in 2012, is named in her honour. 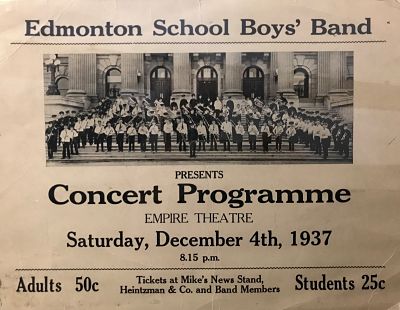 In 1937 the band, now 100 strong, took part in the parade to honour the coronation of King George VI and gave a special concert in honour of the coronation. 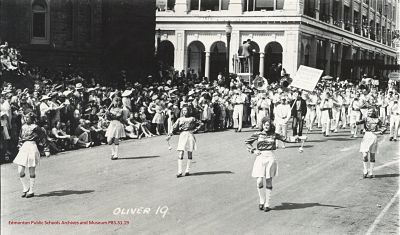 1939 was an exciting year for the band. The Calgary Gas Company paid for their trip expenses so they could honour an invitation to play at the Calgary Stampede. The band also played at the CNR station to welcome King George VI and Queen Elizabeth (Queen Elizabeth II’s mother) to Edmonton, on their cross Canada tour. It is believed that they were the only civilian band to play the Royal salute for Their Majesties on their tour.

The band played regularly for the Edmonton Eskimos and Edmonton Grads. They were in big demand for parades, rodeos and building openings. The Edmonton Schoolboys’ Band gave their final performance in May 1969 in the Victoria Composite High School Auditorium. 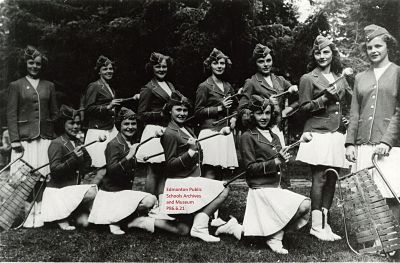 In 1939 Vernon Newlove added majorettes to the Edmonton Schoolboys’ Band. They added flair to parades and often performed routines with their batons in front of the band at concerts.

On May 13, 1945 the band was scheduled to participate in a march past during the VE Day parade. Marshals would not allow girls to take part in the parade because of bylaws governing military events. Rather than seeing the majorettes excluded from the group, Newlove withdrew the band from the parade.

Community support for the band and the majorettes was so strong that the City Council was forced to change the bylaws in order to allow girls to take part in future military events. This ensured future participation of the band in military events as well as being another step in equality for women. 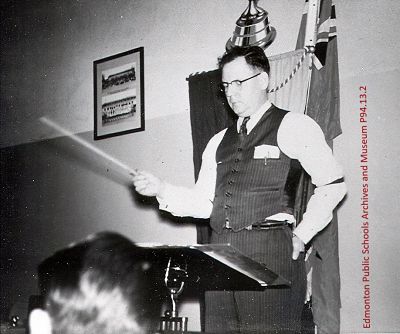 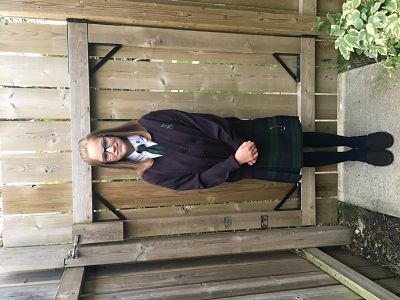 October 18 was Persons Day in Canada. It was on this day in 1929 that the British Privy Council (Canada’s Highest Court of Appeal at the time) ruled that women were indeed “persons”. Canada’s constitution at that time only used the word “he” when talking in the singular and therefore the men of the time used this to justify that women were not ”persons” and were not entitled to all the rights of men. The Persons Case, as it is known, was taken to the Privy Council by the lawyer for the Famous Five - a group of Alberta women pushing for equal rights for women. One of these ladies was Nellie McClung.

In 1995, Edmonton Public Schools launched the Nellie McClung program for junior high girls. This highly successful program, based at Oliver School, is focused on empowering girls to lead, challenge and change the world. 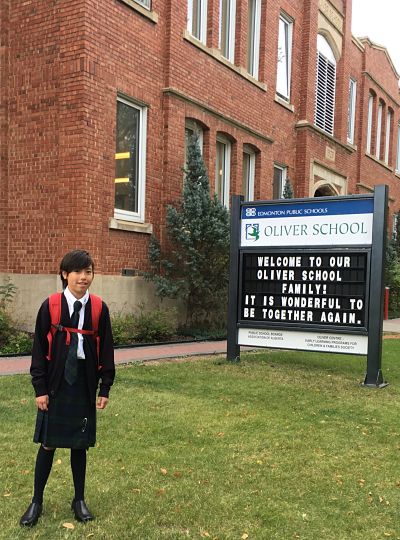 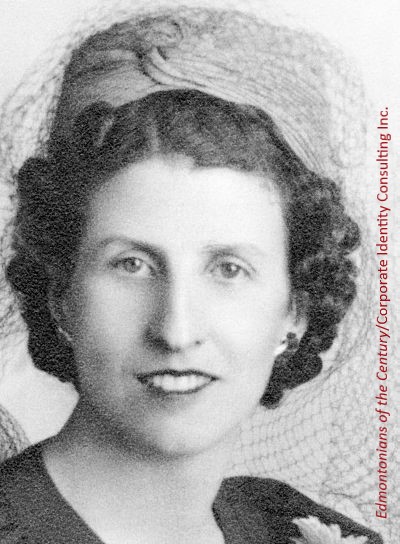 Velva Hueston was a teacher for Edmonton Public Schools at a time when female teachers, in accordance with board policy, were expected to resign as soon as they were married. In 1943 she married, becoming Mrs. Velva Thompson, but in a forceful letter to the Board indicated she had no intention of resigning citing that Section 246 of the School Act “does not permit any discrimination as between men and women”. When asked by the Board to amend the School Act the Province refused and the Board was forced to change its policy. Velva Thompson had won and remained on the School Board staff for a further two years when she retired to raise her daughter. She returned to teaching in 1956 and taught for nine more years at Coronation and Westminster Junior High School.

As a result of her bold actions, the status of female teachers who married and wished to remain on staff was ensured. 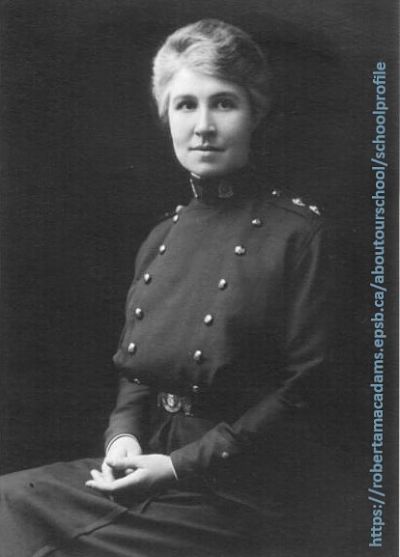 Roberta MacAdams moved to Alberta in the early 1900s and worked with rural women teaching home economics and surveying their needs. Her work led to the creation of the Alberta Women’s Institutes, a support network for rural women.

In 1912, she was hired by Edmonton Public Schools as Supervisor of Household Science.

In 1916, she was commissioned as a lieutenant in the Canadian Army Medical Corps and oversaw the production of over 3500 meals a day for patients and staff at the Ontario Military Hospital in Orpington, England. In 1917, she was elected to the Alberta Legislature as a member at large representing Albertan soldiers and nurses serving overseas. She was the second woman elected to the Assembly, after Louise McKinney who was elected in the same election.

MacAdams became the first woman in the British Empire to successfully introduce and pass a piece of legislation, the "Act to Incorporate the Great War Next-of-Kin Association."

In 1921 she moved to Calgary with her husband and son where she continued to work with women’s and educational organizations until her death in 1959. 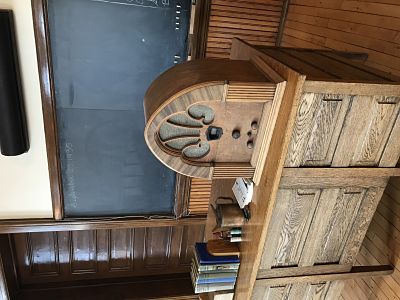 Technology in the Classroom - Radio

Today it seems hard to imagine that at one time radio was the latest in technology, however this is indeed the case. In the early 1930s, radio was being used as a teaching aid in the classroom using local radio programs, the most popular subject being Music.

Philco Superheterodyne 90 Radio which was popular in the 1930s. 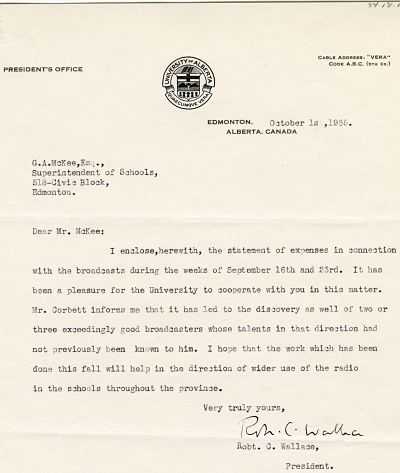 Just as today’s technology has been a tremendous, if not vital, asset during the current pandemic so was radio during an epidemic of 1935. We believe that this was the polio epidemic of 1935 as schools were closed during September of that year to help stop the spread of this highly contagious and often deadly disease. Information at Edmonton Public Schools Archives and Museum indicates that “lessons were broadcast on the University of Alberta Radio Station, CKUA. Broadcasts were made when the schools were closed due to an epidemic.” 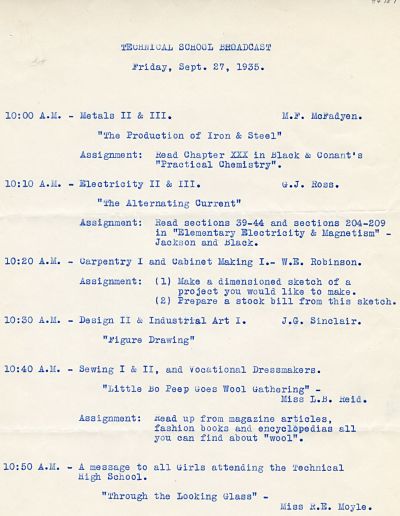 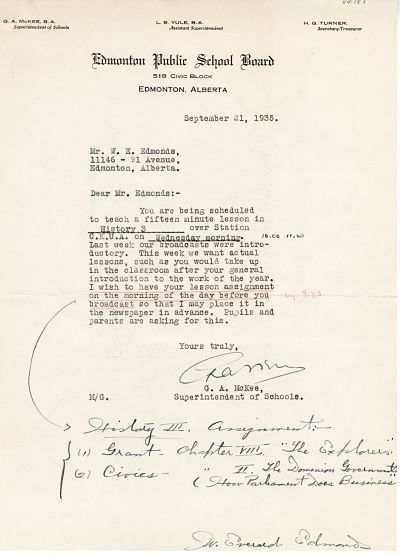 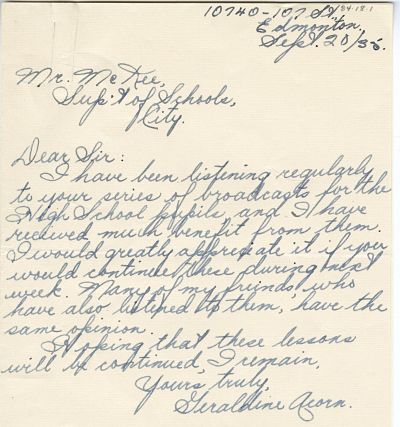 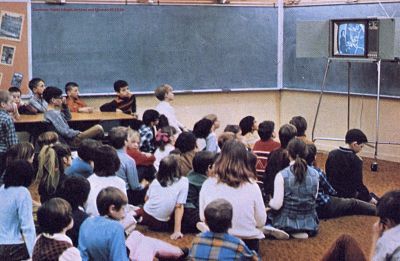 Technology in the Classroom - Television

Following radio, television was the next big technological innovation in the classroom. In 1954, television experiments were recommended to the Board. In co-operation with CBC and the Department of Education, four schools were selected to participate in a television project to determine the future usefulness of the media as an instructional tool.

The 1959 Educational T.V. programs were made available for public viewing over CFRN-TV as well as for classroom use. Master teachers projected a series of daily lessons in science, social studies and spelling to selected classes during March.

On Oct 9, 1973, Trustees voted unanimously to allow television stations to televise Board meetings. The first meeting to be televised was the organizational meeting of October 23, 1973.

Pictured are students, at an unidentified school, viewing television in their classroom in 1970.

Technology in the Classroom - Computers

The first mention of the possible use of computers in Division schools appeared in the 1966-67 Edmonton Public School Board Annual Report. It states that the Trustees approved the planning and acquisition of an IBM Model 30 computer for accounting and statistical records; this would also be the first step towards the use of computers for instructional purposes.

Computer terminal experiments were initiated at Jasper Place Composite High, Hillcrest Junior High, McDougall Elementary-Junior High and Richard Secord Elementary in 1970. The project, funded by Alberta Human Resources Research Council, IBM Canada, and the University of Alberta, was to determine which curricular area might benefit the most from the use of this new technology. 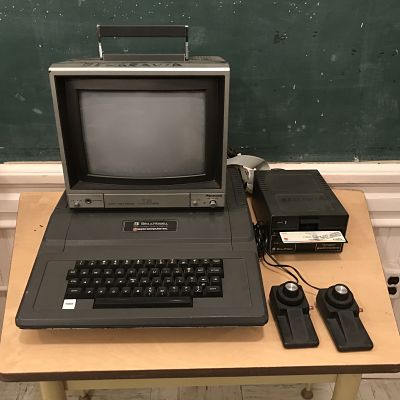 Pictured is a Black Apple II Plus computer produced in the 1980s. The black version of the Apple II Plus was made exclusively for Bell & Howell for sale to educational institutions. 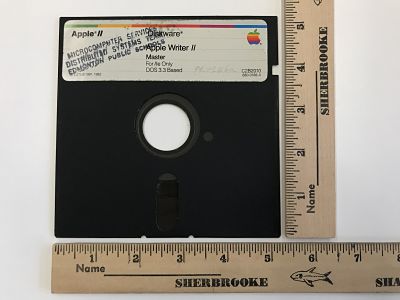 Data was stored on a 5.25” floppy disk. The highest capacity floppy disk made was 1.2MB. A 128 GB smart phone holds the equivalent data of over 106 thousand floppy disks!