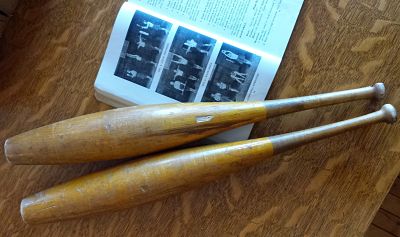 When the British came across exercising clubs in India, during the 1800s, they named them Indian clubs. During the British colonial period, the officers made note of the use of the clubs as a total body workout. They were used by a group of exercisers, led by an instructor, in a series of synchronised movements. 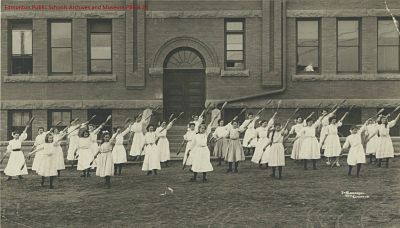 The clubs eventually made their way to North America and into schools’ physical education programs. This is a group of McKay Avenue School girls taking part in Indian Club training in the early 1900s. 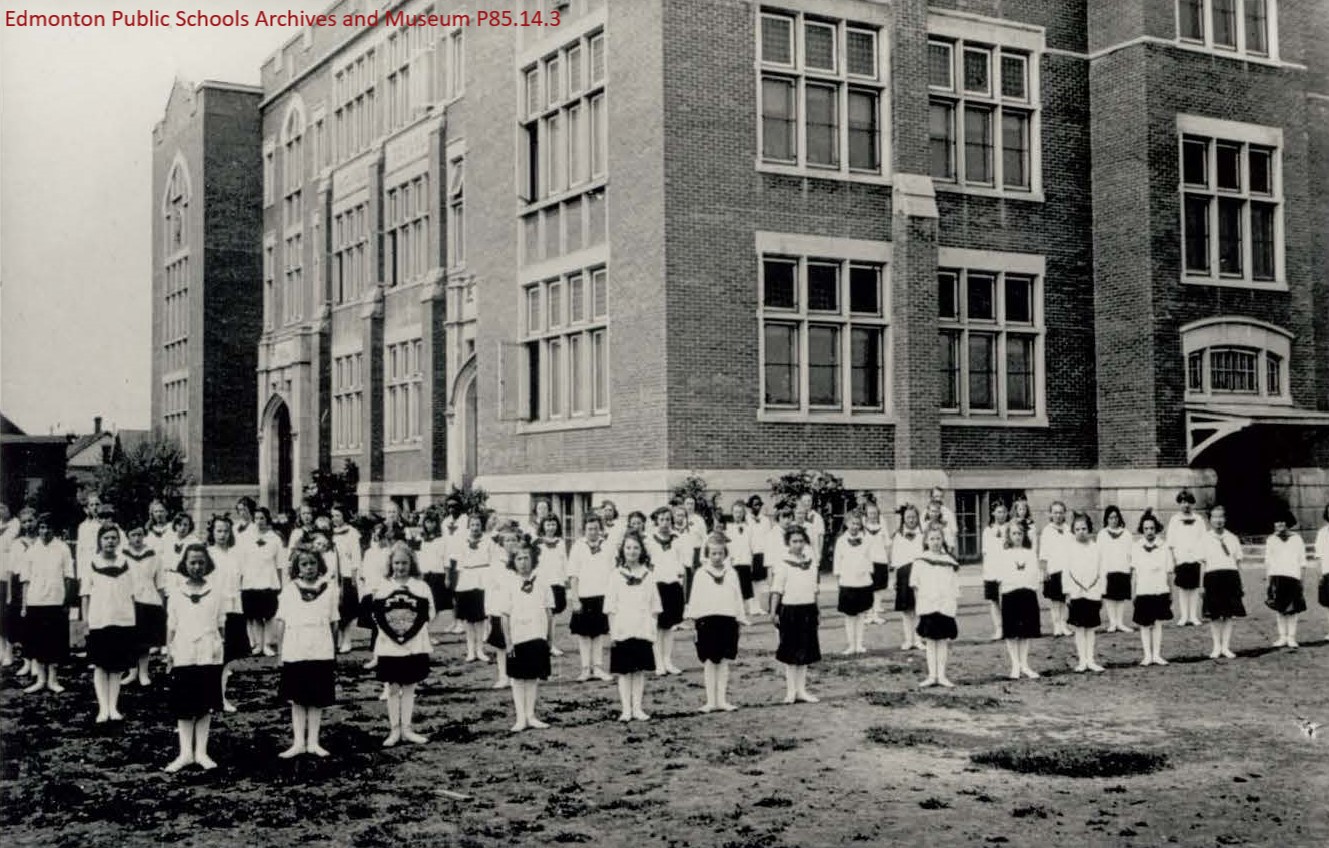 In 1890, calisthenics was added to the curriculum of public schools (Standards I - IV or Grades 1-8). The province announced a new physical culture program in 1907, with physical training continuing to be the focus. Today’s photograph is of the McCauley School Junior Girls Physical training class in May 1920. A girl in the front row holds the C. K. Flint Trophy. This was the first year the trophy was awarded by The Edmonton Journal to the Junior Physical Training class that received the highest mark in an annual competition within Edmonton Public Schools. 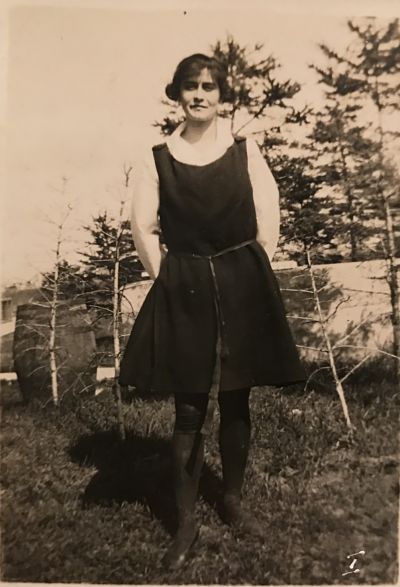 Physical Education Uniforms Over the Years

Gym attire for students has changed over time; most notably for girls. Our first image is Edith Chauvin, “physical instructress” at Victoria High School in 1920. 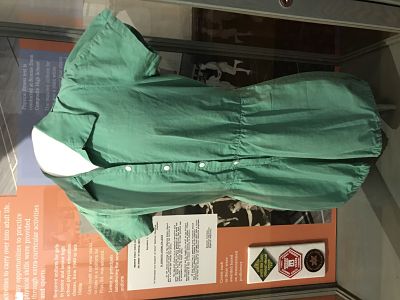 The second image is the required Phys. Ed. uniform for girls in junior and senior high school from 1949 to the late 1960s. It was adopted as girls could not wear slacks to class. The required uniform for boys at this time was a plain white T-shirt and royal blue shorts with a white side stripe and elasticized waist. 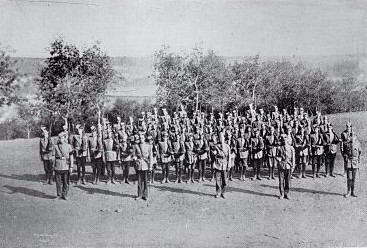 Pictured is the Edmonton Public Schools’ Cadet Battalion of 1910. The cadet movement began in Eastern Canada after the American Civil War and the Fenian Raids. The movement spread to Western Canada in the 1890s as a result of the $50 incentive grants provided to schools forming cadet corps. The first recorded history of a military cadet drill in an Alberta school was documented in 1895, at the old Central School in Calgary. Organization of a Calgary School Cadet Corps was formalized in 1904.

Three years later, in 1907, in response to a petition from the students of the Edmonton High School, it was decided by the Edmonton Public School Board to organize three cadet companies. One company was organized at College Avenue School (Edmonton High School), one at McKay Avenue School and one at Queen’s Avenue School. The High School Company, designated “A” Company, was organized by Captain C. K. Flint on December 20, 1907. By 1908, school companies were also active in Alex Taylor and Norwood Schools. On March 12, 1908, the Edmonton Public School Cadet Corps was entered into the records as Cadet Corps #180. 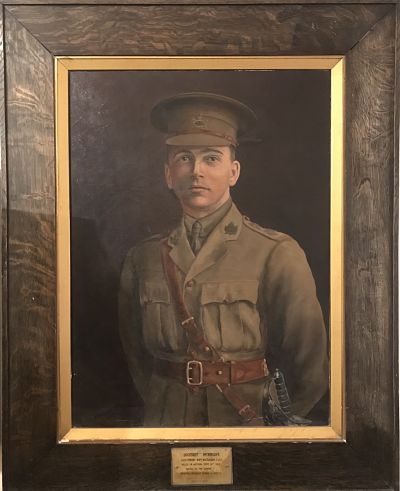 A portrait of Locksley McKnight is part of an exhibit on the main floor of Historic McKay Avenue School. Lieutenant Locksley McKnight, who left his position as principal of McCauley School to join the World War I war effort, was one of four Edmonton Public Schools teachers who did not return from the war.

We do not know how many Division employees joined the war effort; however, during the first six months of the 1916 school year 15 staff members, mostly teachers, had enlisted. A 1914-1918 Honour Roll lists the names of 109 high school students who fought in the Great War. It is unknown how many students died.

During the Second World War, 59 staff and 1400 high school students served with the Canadian Armed Forces. There were no fatalities amongst the staff members but sadly 115 students made the ultimate sacrifice.

On Remembrance Day 2021, we remember and honour the staff and students of Edmonton Public Schools, and all Canadians, who fought for our freedom. 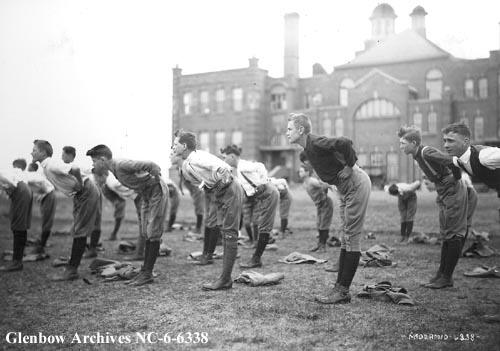 Initially, school cadet training was incorporated into the new physical culture program announced by the province in 1907. Training included military squad drill practice, rifle drill and bayonet exercises. Target practice often included live ammunition, supplied by the Department of Militia and Defence. Participation in this military training was compulsory for all boys 12 years and older.

Although the military drill aspect of the physical culture course was designed for boys, girls received some very rudimentary training in marching and military drill as well. Most of the girls’ program, however, focused on gymnastics. Dumb-bell, wand, and Indian club drills, as well as outdoor basketball were also included in this new program. 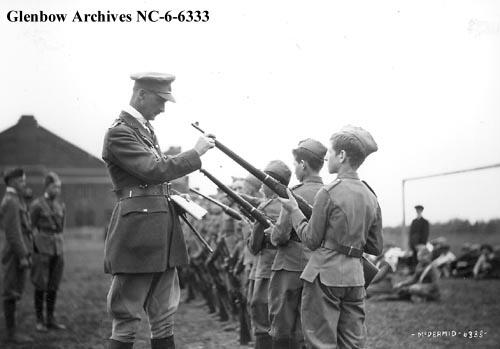 One of the cadet activities that caused much concern to Trustees was target practice and the use of live ammunition by 12 year old boys. At the meeting of the Board on January 4, 1918, permission was granted to allow target practice inside the schools. In Superintendent Carpenter’s memo to principals the next day, he stated that permission was “granted to erect 4½  foot square targets in the Assembly Hall of city schools where the facilities in the basement made it impossible to get a 20 or 25 foot range for target practice.” Strict rules were also outlined. Targets were to be “filled with sand or soil and tightly boarded to prevent the spilling of the filling on the floor.” Practice was “not to be done during school hours and only in the presence and supervision of the teacher.”

Needless to say, target practice assisted in maintaining the interest of cadets in their work! 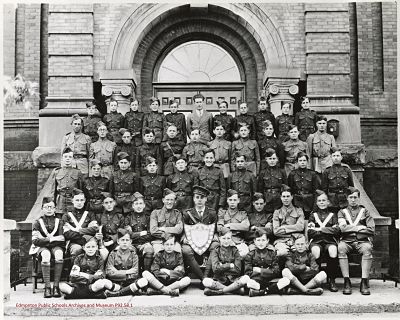 The End of the School Cadet Movement 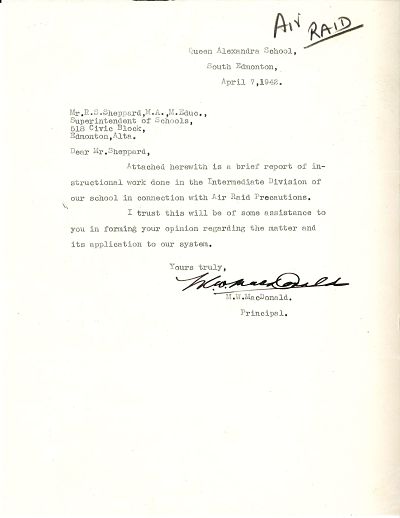 In March of 1942, arising from a suggestion by the Garneau Home and Schools Association, a project on “air raid precautions” took place with intermediate level students at Queen Alexandra School. The results were to be used as a basis of determining the feasibility of carrying such projects throughout the Division. Our image today is the cover letter of the three (3) page report sent to Superintendent Sheppard by the Principal of Queen Alexandra School, Mr. M. W. MacDonald, at the conclusion of the project.

It was reported that some of the information studied was the possibility of air raids, where such raids might come from, types of raids (sudden attacks or those preceded by warnings), what to do in each case, types of shelters and their use, composition of different types of bombs, what to do at school and at home, protection from flying glass, and first aid.

The report also indicated that “In the classroom drills were carried out to provide protection from flying glass. All students left seats and crouched down close to walls at the same time protecting their eyes with their arms. This was of course only for sudden attacks when pupils were to remain in their own room.”

For warnings given in advance of an air raid, the report suggested “pupils could be conducted from the school to their homes. For this purpose, teams of two pupils were assigned to go to other classes to assist teachers with organization and conducting pupils to their homes.”

Mr. MacDonald concluded his report by stating “I consider the experiment both interesting and worthwhile, and one about which I think every school could do something.”

For students in Edmonton Public Schools, November brings the first Progress Report. Referred to in the past as Report Cards, many of us will remember having them handed out at the end of the day with strict instructions from the teacher not to open them until we got home. These days are gone as today’s Progress Reports are prepared digitally and posted online on each student’s Schoolzone account at a preset time on a selected date. Today’s images illustrate how the Division’s report cards have evolved during our 140 year history. 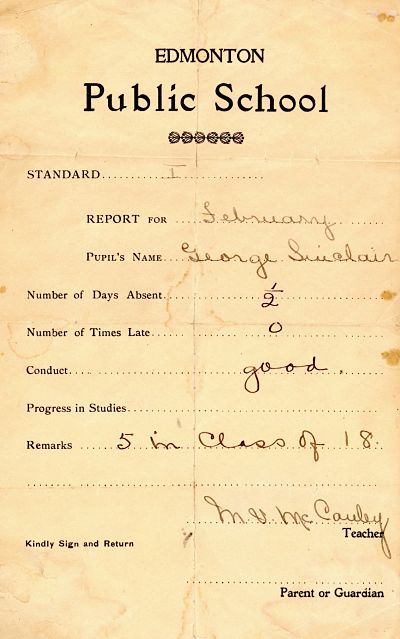 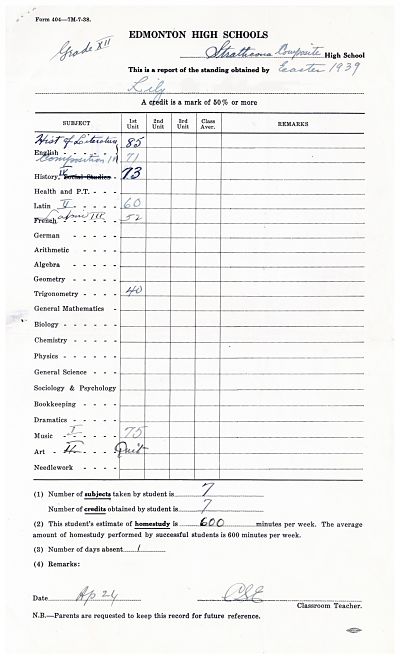 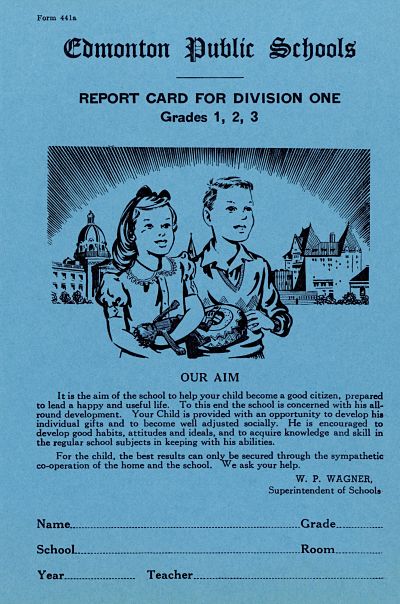 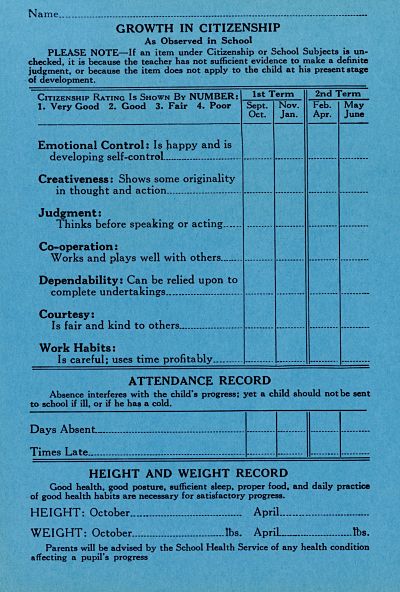 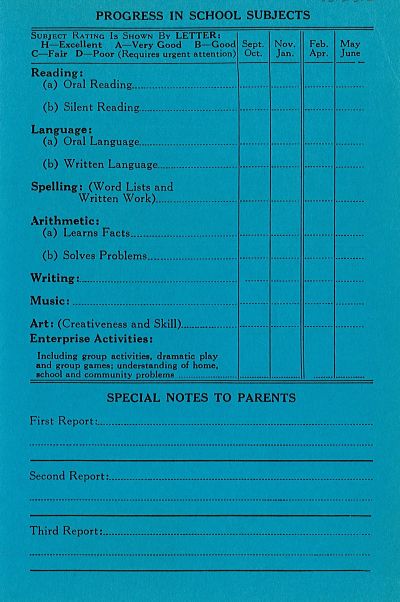 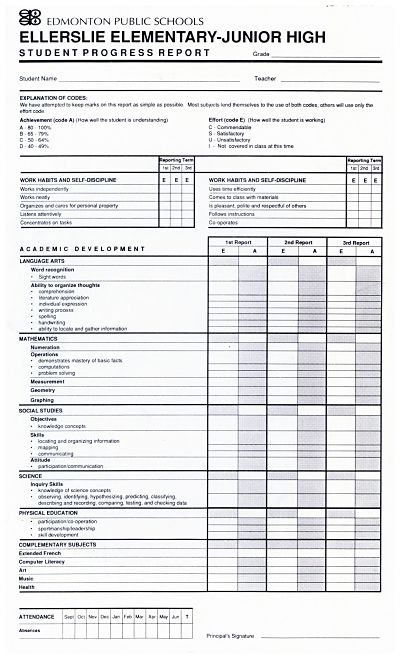 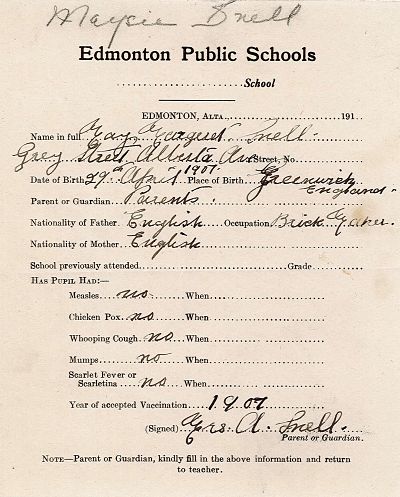 Today, when a parent wants to register a child to attend Edmonton Public Schools they fill out either a seven page online form or a six page paper form. In the past, parents filled a one page form.

Image 1 is a form filled out in September 1913 for Highlands School. Information from this form was transferred to an Enrolment and Attendance Record card (image 2) on the back of which was a Medical Inspector’s Record (image 3). 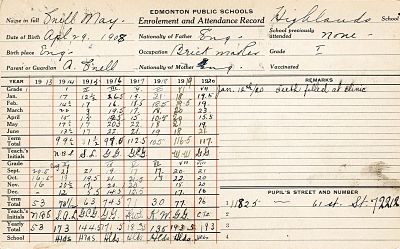 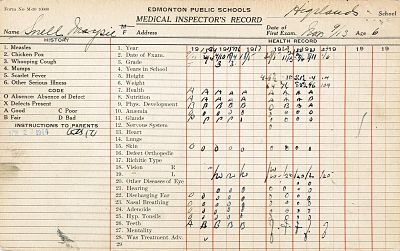 Edmonton Public Schools Archives and Museum houses these records dating as far back as the birth year 1896. These records can be a valuable source of information for individuals doing genealogical research. 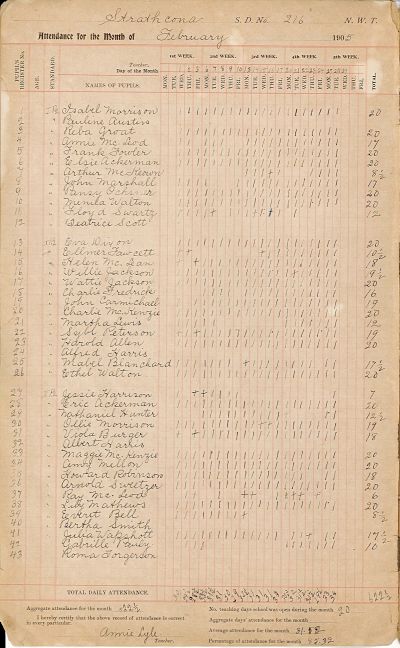 Like Progress Reports, recording student attendance has gone digital. Today, teachers merely indicate each student’s attendance status daily on the computer. In the past, attendance was marked in the teacher’s Attendance Register.

At the end of each month the teacher was responsible for tallying each pupil’s attendance for the month (horizontal row) and the class total for each day (vertical column). The magic moment came if the total of the final column agreed with the total of the bottom row. If not, all the figures had to be recalculated until the tallies were equal. Registers were then sent to the office.

Pictured is an Attendance Register from Strathcona S.D. No. 216 of the North-West Territories Jan - Dec 1905. 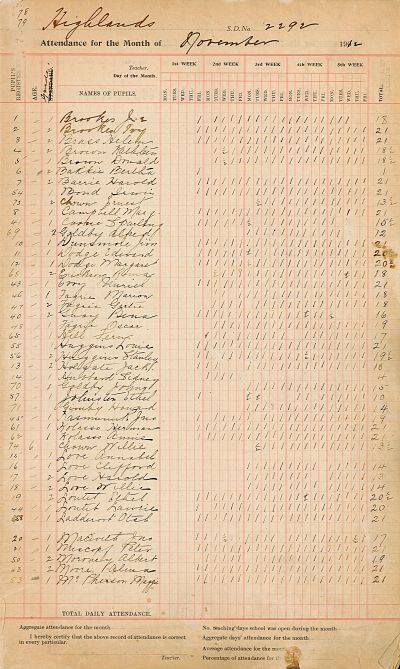 It would appear that class size is not a new issue. While acknowledging that today’s classroom is likely far more diverse in its needs than in the past, it may come as a surprise to many just how large classes could be in the past.

In 1912, an attendance register (1st & 2nd images) from Highlands School indicated that Miss Scarth registered 73 pupils for a Grade 1 - 2 class. By November the enrolment had increased to 78! Enrolment at Highlands temporary schools was among the highest in the city at this time. 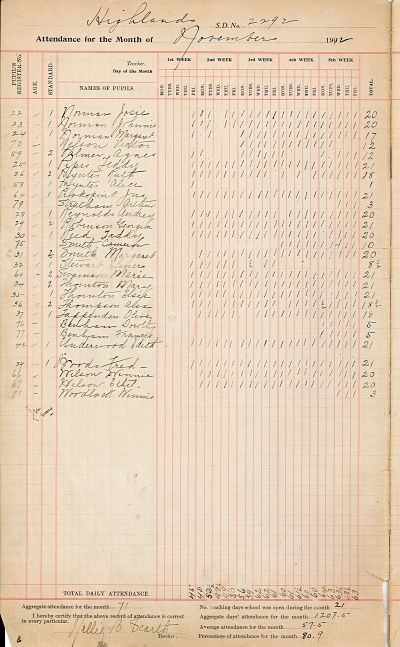 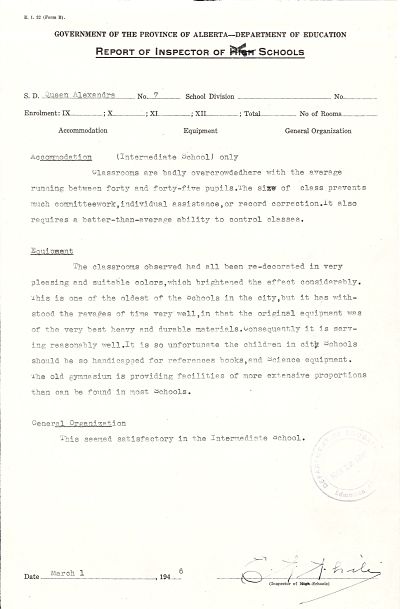 A Report of Inspector of Schools (3rd image) dated March 1, 1946 states that the Intermediate classes at Queen Alexandra School were “badly overcrowded with the average running, between forty and forty-five pupils.” It goes on to list problems caused by such overcrowding. 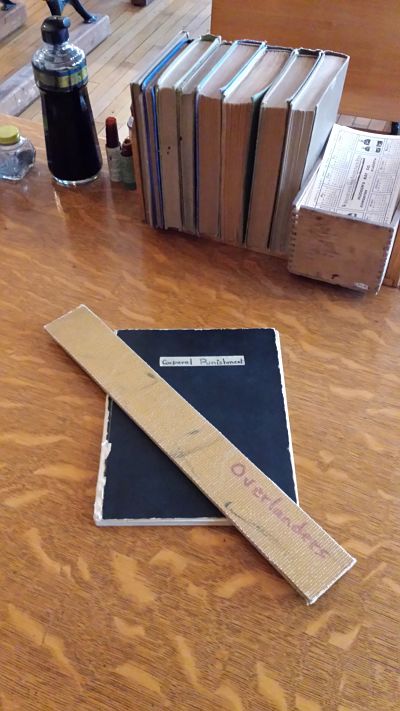 Corporal punishment was used as a form of discipline and is documented as early as 1906 in Edmonton Public Schools. The By-Laws and Rules of Order 1910 issued by the Board on February 17, 1910 stipulated the proper use of a suitable strap. It was to be used in extreme cases and only after the approval of the principal. Each school was required to keep a record of corporal punishment giving date, student’s name, behaviour and number of strokes of the strap. Some of the recorded offences were impertinence, laziness, poor writing, talking, carelessness, fighting, blasphemy, truancy, disobedience, rudeness, swearing, running in room. Regulation #5 in the By-Laws and Rules of Order stated that pupils “shall go directly to and from school and shall be responsible to the teacher for their behaviour on the way to and from school unless accompanied by parents or guardians.” 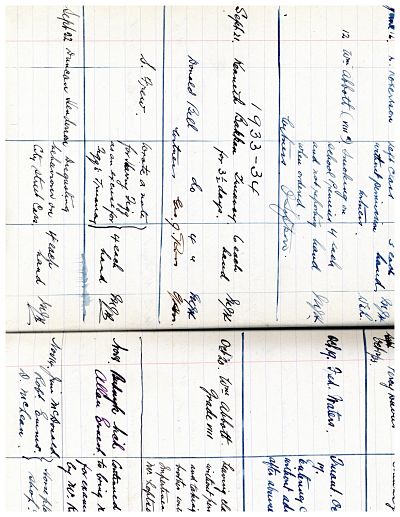 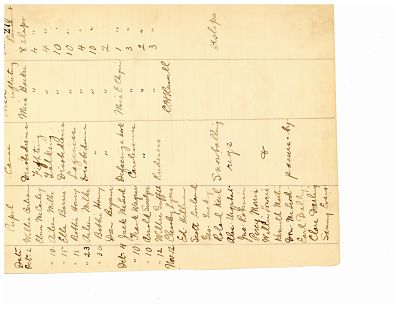 Snowballing on city streets was also a serious misdemeanour. On November 12, 1906, the headmaster of Queen’s Avenue School administered six (6) to eight (8) slaps of the rubberized strap to thirty-two (32) students of his school. All of the culprits were apprehended in the act of “snowballing rigs and passersby.” (Image 3)

One day in the 1930s, the principal of Westmount School, on one of his regular noon-hour patrols in the area, discovered several students marking up the sidewalk with chalk. As the principal always carried a strap with him, punishment was immediately administered . Upon arriving at school the next morning he was confronted by several angry parents waiting in his office. Much to his chagrin, he discovered that the young graffiti artists he had strapped were not Westmount students but students from a nearby Catholic school!

The use of corporal punishment was officially discontinued by Edmonton Public Schools in 1990. 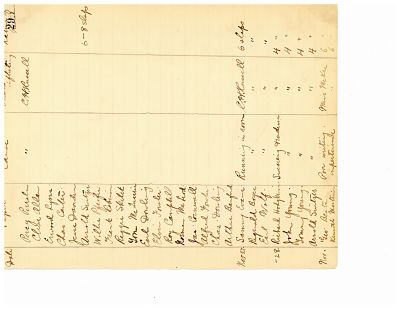