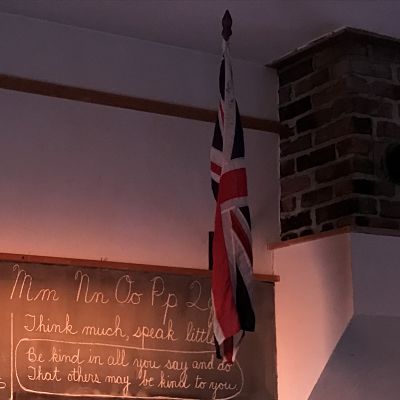 On January 31, 1941 Alberta school trustees passed a resolution based on a proposal submitted by Edmonton Public School Board Trustees. It encouraged the provincial government to require some form of patriotic exercise such as saluting the national flag, which at that time was still the British Union Jack. For more on this story go to https://edmontonjournal.com/news/local-news/jan-31-1941-alberta-trustees-want-compulsory-saluting-of-flag-in-schools 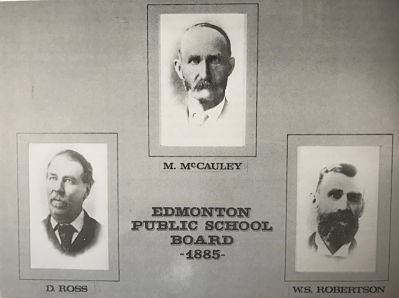 On February 3, 1885 the School District of Edmonton of the Northwest Territories, Protestant Public School District #7 was created. This was the result of a hotly contested debate in Edmonton as many citizens were opposed to the taxation that would result. It did help with the ongoing financial problems of operating the school. 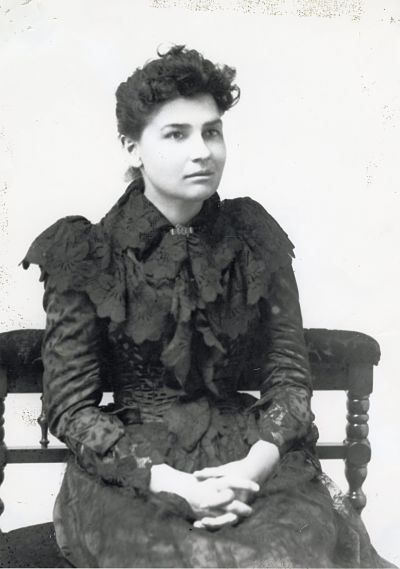 Did you know that the first female teacher was hired by Edmonton Public Schools in 1889? Lillian Osborne, daughter of the local postmaster, was employed for over 30 years, and taught at McKay Avenue School, Old Queen’s Avenue School, Delton School, and Glenora School. Today, there is a school named after her. 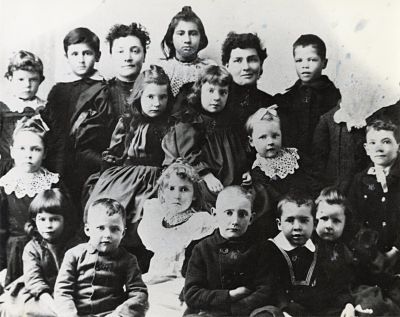 Lillian Osborne with students circa 1890. Miss Osborne was to remain a single woman all her life. At this time, only single females were engaged for regular teaching duties and any female teacher who was married while in the employ of the Board was forced to resign. From 1889 to 1946 there was a substantial difference in the salaries of male and female teachers with the same teaching qualifications. Lillian Osborne died on November 3, 1929 while still on staff at Glenora School. She was 60 years old and had dedicated almost 40 years of her life to teaching. 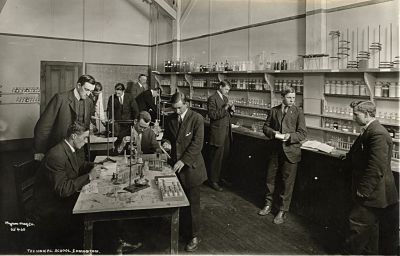 Tomorrow is International Day of Women and Girls in Science. Today’s photograph, taken sometime between 1913 and 1923 of only male students in Edmonton Technical School’s science lab, is a reminder of how much more inclusive education is today in Edmonton Public Schools. Today, you will find a strong focus on gender inclusivity and promoting female students in science, technology, engineering, and math courses. 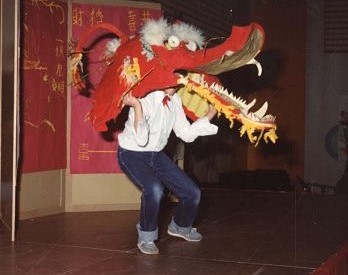 Happy Lunar New Year! In 1984 students at Alex Taylor School celebrated the New Year with a dragon dance! Did you know the Mandarin Bilingual Language Program was approved by the Edmonton Public School Board in February 1983? Today, this school program is being offered at 15 Edmonton Public Schools. 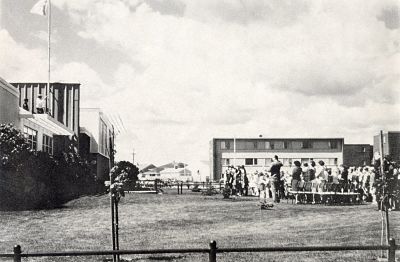 Yesterday was FlagDay! In Canada, this day commemorates the inauguration of the Canadian Maple Leaf. It replaced the British Union Jack and Canadian Red Ensign as Canada’s national flag on February 15, 1965. Pictured are students at McQueen School taking part in a ceremony in June of 1965 raising the Maple Leaf flag. 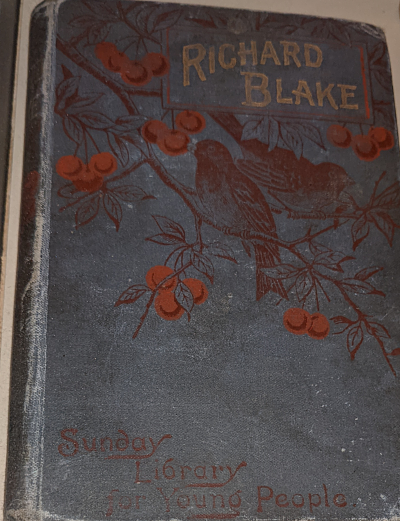 February 14 was International Book Giving Day. In 1886, when Lieutenant-Governor Dewdney of the North-West Territories visited Richard Secord’s class, he was so impressed that he gave ten books to be used as prizes for student achievement. Ten year old Alex McCauley won the book pictured. The inscription inside the book can be seen in the second picture. 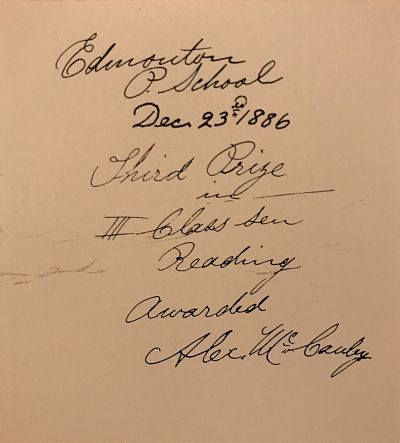 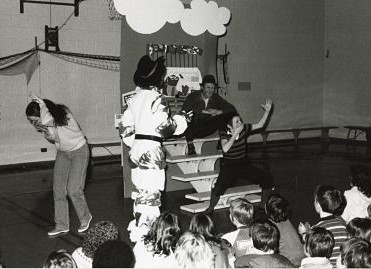 February 21 is International Mother Language Day. Many of the past and present newcomers to Edmonton have a strong desire for their children to be fluent in their mother language. In 1959, Edmonton Public Schools introduced oral French classes in twelve Grades 4, 5, and 6 classrooms. Since then our Division has drastically expanded language programming to include American Sign Language, Arabic, Cree, French, German, Hebrew, Japanese, Latin, Mandarin, Punjabi, Spanish, and Ukrainian. 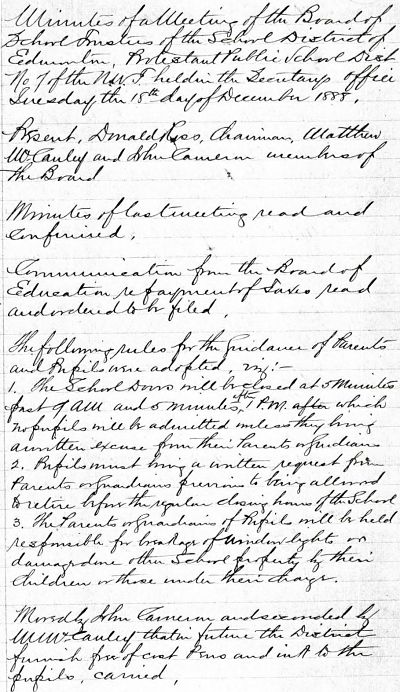 “Rules for the Guidance of Parents and Pupils” 1888

In 1888 the first “Rules for the Guidance of Parents and Pupils” were adopted by the Board of Trustees. These rules covered the hours of operation, how to provide consent for students to leave school early for a day, and how to address damage to property. 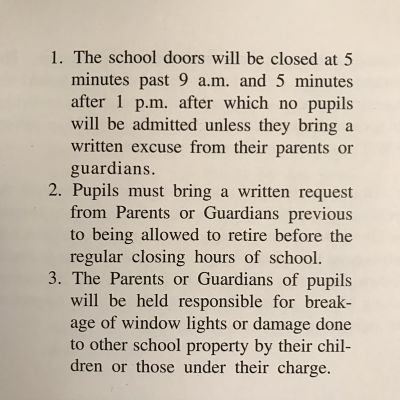 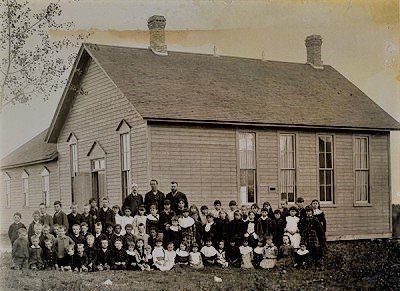 By 1888 the student enrollment of the 1881 Schoolhouse had grown to 82 pupils.  A 28’ by 36’ addition was deemed necessary and approved for construction. James McDonald, who built the original school, was the successful bidder at a cost of $1,550. Along with the new school addition, the purchase of 24 desks was authorized.

James Martin, who was the present teacher, became Edmonton Public Schools first principal.  A second teacher was required and Major Stiff made a reappearance at a salary of $50/month. He remained for one year before he was let go by the Board.