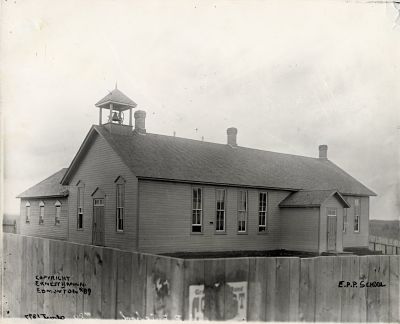 In 1890 Principal Martin agreed to introduce a night school program, which ran three evenings a week to cater to young people who could not attend day classes. He also convinced the Trustees to add a belfry and to erect a fence to keep horses from grazing in the schoolyard.

In 1891 a third classroom was added to the schoolhouse and a third teacher was hired. The new teacher, Janet Henderson, earned $450 per year at this time.  With the addition of a third classroom, the caretaker’s salary was raised to $100 per year. 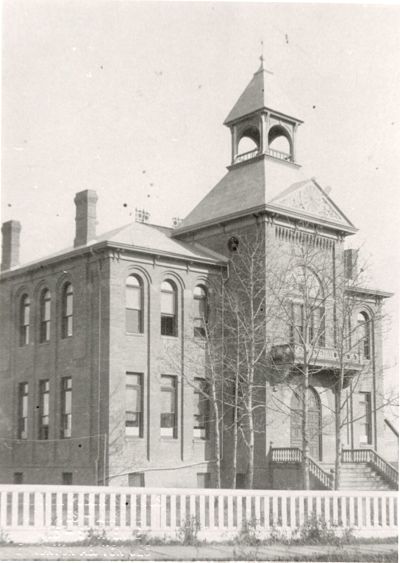 Built in 1895, College Avenue School, containing four classrooms, was Edmonton Public Schools first brick school. A coal furnace and electric lighting were some of the modern features of the school. When it first opened, the school provided elementary and high school instruction. Before the end of 1896 it was discovered that, in addition to other structural problems, the building had been built on the site of an abandoned coal mine and was slowly sinking into the ground. Many efforts were made to remedy this problem. 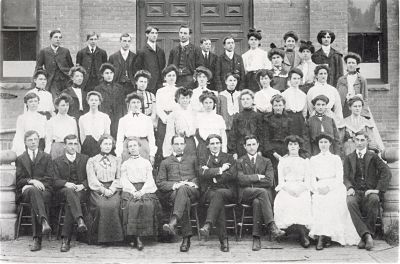 From 1903 to 1911, College Avenue School was used exclusively for high school classes and was casually referred to as Edmonton High School. Despite the crumbling foundation and cracking walls and floor, classes continued until a new high school building was completed in 1911. College Avenue School was demolished in 1918. It was located along what is now Macdonald Drive near the present day location of the Telus building. 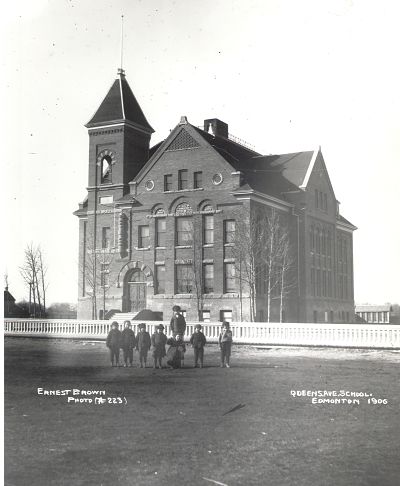 Queen’s Avenue School opened in 1903. It had 10 classrooms and was built to accommodate 500 students. When construction began, people wondered why it was being built in the bush on the outskirts of town. If still standing today, it would be on the west side of the Royal Alberta Museum! In 1905 the Canadian Northern Railway line reached Edmonton and the tracks were 30 metres north of the school creating both noise and safety problems. 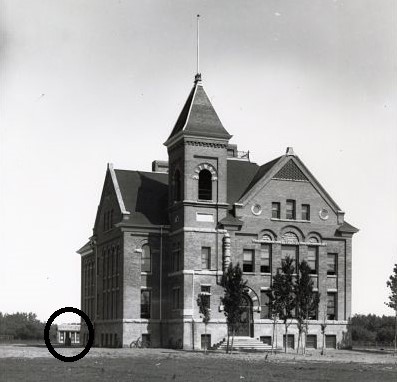 Tomorrow, March 11, is World Plumbing Day so it is only fitting to do another post about Queen’s Avenue School.  If you look closely at today’s photo and the previously posted photo, you can see the row of outhouses behind the school. These were of course a necessary fixture at schools. In 1904, much to the delight of students and staff, indoor plumbing was installed and Queen’s Avenue School became the first Edmonton Public School to have indoor washrooms.

In our previous post, we mentioned that the arrival of the railroad brought with it both noise and safety problems. Despite this, Queen’s Avenue School was used until 1926 when it was sold to the railroad company and eventually demolished in 1949. 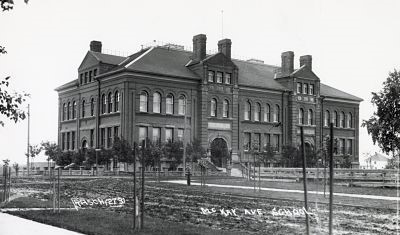 Of the 36 public schools built prior to 1921 half of them are still standing and continue to serve our community.  We will be featuring these centenarians over the next several weeks.

Built in 1904, McKay Avenue School is now the oldest brick school still standing in Alberta. It was named after Dr. William MacKay, who worked for the Hudson’s Bay Company until 1898 when he opened a private practice in Edmonton that he ran for 19 years. The road in front of his house was named in his honour but it was spelled “McKay” Avenue. Subsequently, the name of the school was also spelled incorrectly. When Alberta became a province in 1905, our government met for the first two sessions on the third floor of the school. In 1912, a four room addition and second front entrance was added.

McKay Avenue School closed in June 1983. Already a Provincial Historic Site, it was saved from demolition and lovingly restored, partially with the assistance of students from W.P. Wagner School. Today it is a public archives and museum. In addition to facility rentals and self-guided tours for the public, the educational programs in the two historic landmarks help to give students a sense of place and history. 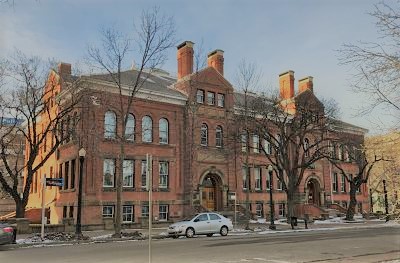 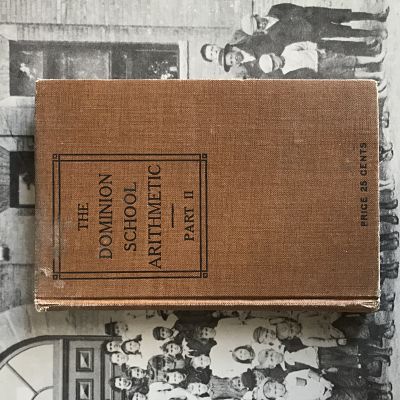 March 14, was the International Day of Mathematics. The Dominion School Arithmetic textbook was published in 1908 and authorized for use in Alberta 1912-1922 in Grades 7 and 8. It would have been one of the earliest authorized resources utilized by Edmonton Public Schools.

The second photo comes from the review section at the beginning of the book so it would seem reasonable to think that a student leaving grade 6 would be capable of doing these questions.  Anyone care to give the problems a go? 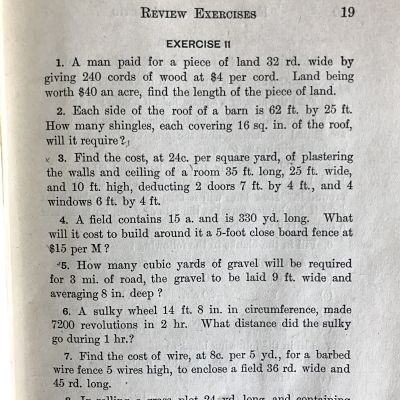 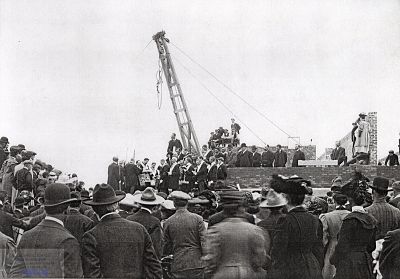 Alex Taylor School: Then and Now

Alex Taylor was the first of only a handful of Trustees in the history of Edmonton Public Schools to have the honour of a school being named after them while serving as an elected official. The cornerstone for Alex Taylor School was laid in a colourful ceremony in August 1907 and the school opened in March of 1908. In 1914 a program was launched at Alex Taylor School, and one other school, to provide lunches to the children of impoverished families. The cost for pupils able to pay was 2c for a cup of milk and 1c for each slice of buttered bread. Children unable to pay were provided with a free lunch. The school closed in 2001. Today it serves as the centre for Edmonton City Centre Church Corporation (E4C). E4C delivers multiple programs in adult literacy, hot lunch programs and family counselling services. 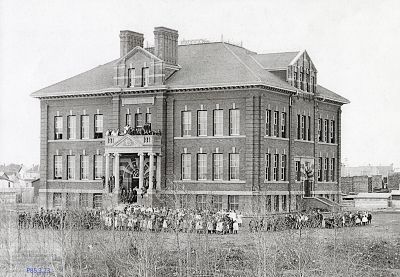 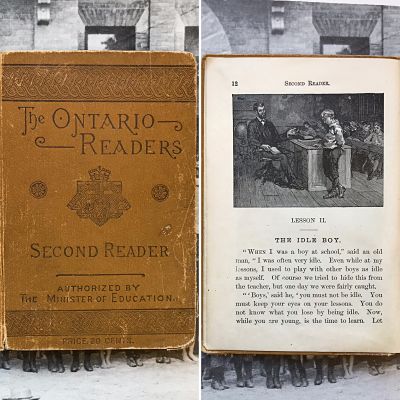 Today is International Read to Me Day. Through the years many “Readers” have been used in Edmonton Public Schools. Today we are sharing three (3) of these books spanning 86 years.

1) The Ontario Readers: Second Reader was used for Standard 2 which is equivalent to Grade 3 and 4.  It was authorized for use from 1890 - 1907.  Many of the stories were meant to teach a moral lesson. 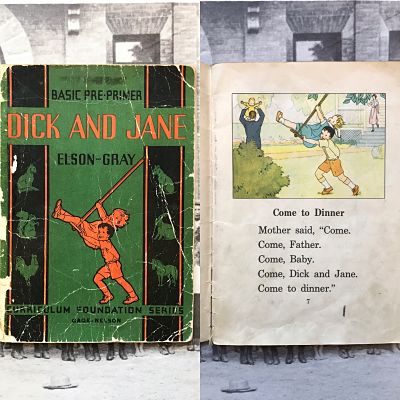 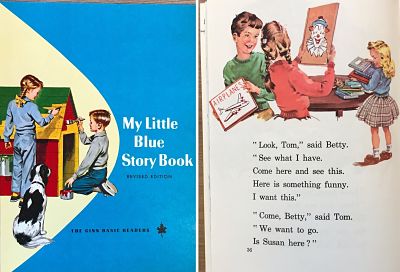 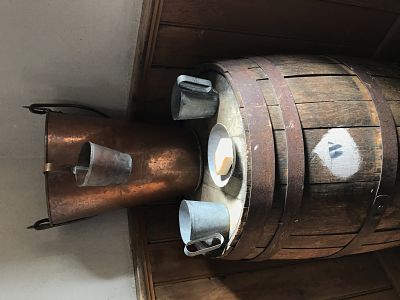 In the first decade of the 1900s Edmonton was experiencing a rapid growth in its student population. Several temporary schools were hastily built: Norwood Extension and Syndicate Avenue North and South were built in 1906. While the students at Queen’s Avenue, McKay Avenue and Alex Taylor schools were enjoying running water and indoor toilets, students at the temporary buildings still had to be content with water buckets, dippers and outhouses. In the summer water would be delivered by the water wagon and stored outside in large wooden barrels and in the winter could be obtained from melting snow. 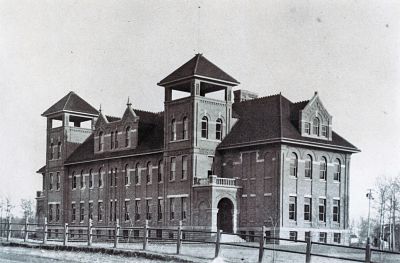 Queen Alexandra School, being on the south side of the river, was built in 1906 by the Strathcona School District #216 and was originally named Duggan Street School. In 1908, the third floor assembly hall served as a temporary lecture hall to 45 students attending the newly formed University of Alberta. It was renamed Queen Alexandra School in honour of the wife of King Edward VII in 1910. When Edmonton and Strathcona amalgamated in 1912 it became part of Edmonton Public Schools. A large addition was completed in 1913. Today, Queen Alexandra School continues to serve the community as an elementary school and offers both the Logos Christian Program and French Immersion. 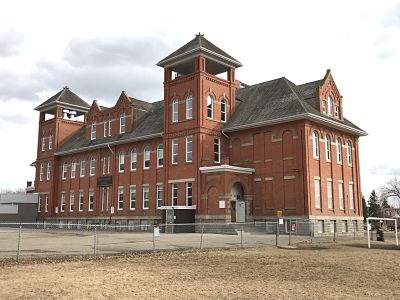 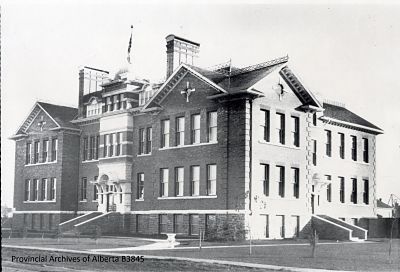 Another school that started off as part of the Strathcona School District is Old Scona. When construction began in 1907, the Strathcona Collegiate Institute was described as the best equipped school in Alberta. It was the first high school built on the south side. In 1913, the name was changed to Strathcona High School. Old Scona has served a variety of purposes. In 1958 it ceased to be a high school and until the mid ‘60s it housed junior high classes. Later it served as a special education school, a continuing education center for adults and an annex of Grant MacEwan Community College. In 1976, Old Scona reopened as an academic high school. Today, Old Scona Academic School continues to prepare its students for post secondary, just as it did back when it first opened. The academic program has been in place for 45 years and continues to see Old Scona ranked as the top public high school in Alberta. 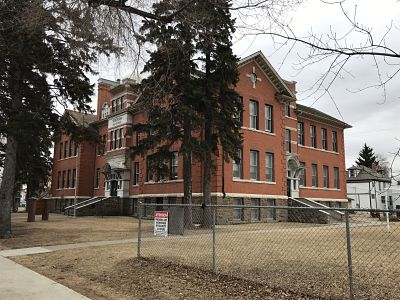 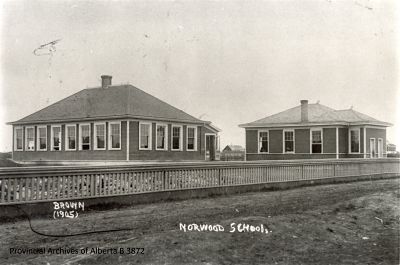 The beginning of Norwood School was in two temporary wooden buildings that were constructed in 1906. Some parents objected to the location of the school, due to the close proximity of piggery, a nuisance grounds (garbage dump) and a slaughterhouse. The school was even referred to as Rat Creek School, due to the creek flowing south of the buildings, before the name Norwood School was formally chosen. These temporary buildings were last used in 1914. 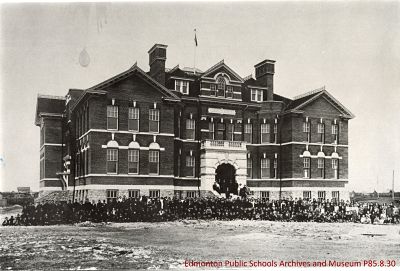 In 1908, construction began on the present day Norwood School and the official opening was February 26, 1909.  At this time, enrolment in the temporary Norwood School buildings was averaging 51 students per room. A year previous, the Trustees had been criticized for building such an expensive school in the “wilderness”! 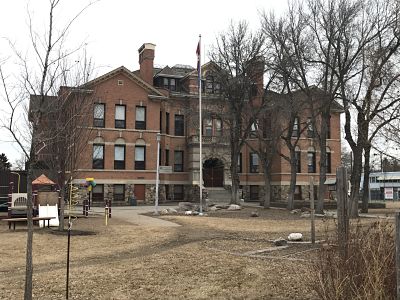 Today, Norwood School continues to serve a diverse community as a Kindergarten to Grade 6 school with a variety of programs. Part of the school philosophy is to create a culture of empowered, expressive and joyful learners. 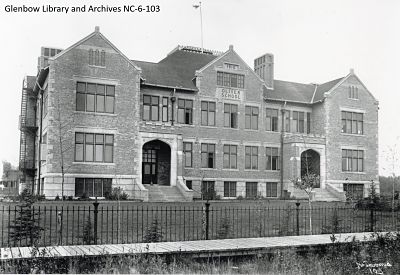 Due to the rapid population growth in Edmonton there was a boom in school construction from 1910-1913. Oliver School was the first school built during this boom. Construction of the school was completed in 1910 and the official opening was March 31, 1911 - exactly 110 years ago today! Each of the 12 classrooms was designed to hold 50 students. A miniature rifle range was incorporated into the design of the school and was eagerly eyed by scores of school cadets. Two teachers: Miss Robina McMillan and Helen Raver were on the Oliver staff for a total of 85 years (from 1919-1962 and 1922-1964 respectively)!

Today, Oliver School continues to serve the local community as an elementary school, including French Immersion, as well as the wider Edmonton community with the Nellie McClung Girls’ Junior High Program.