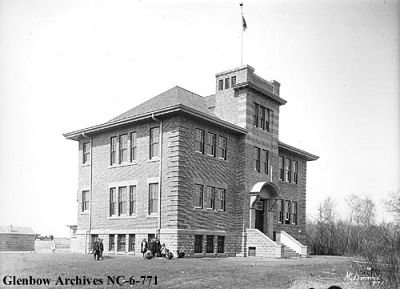 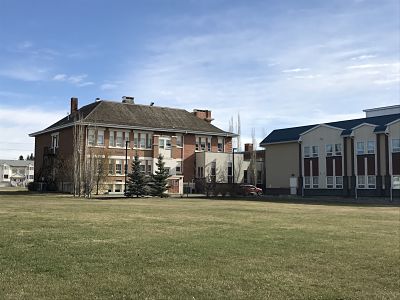 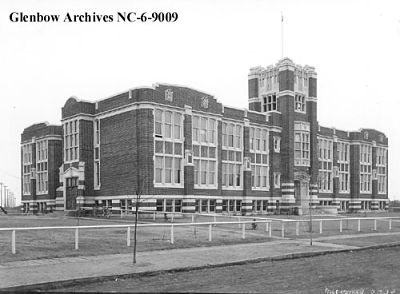 Construction of Highlands School was approved in 1913 but only the first floor had been completed by 1915. It was not until 1920 that most of the second floor was finished and the building was connected to the city’s sewer and electrical service. From 1921 to 1930, Highlands Normal School operated out of the second floor. It was the first teacher training institute in Alberta, serving 110 student teachers in its first year. Six classrooms were added in 1954. For the majority of the last half of the 1900s, Highlands School was a junior high school. 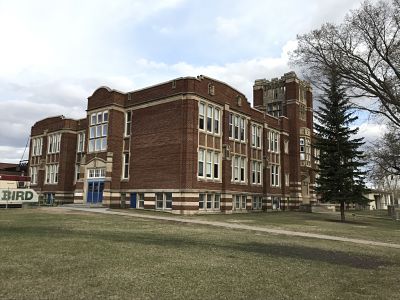 In 2019, a major construction and expansion project began with the demolition of the 1954 addition. A new wing is being constructed and a modernization of the original, historically significant building will take place. In September of 2021, Highlands Junior High will become a Kindergarten to Grade 9 school. 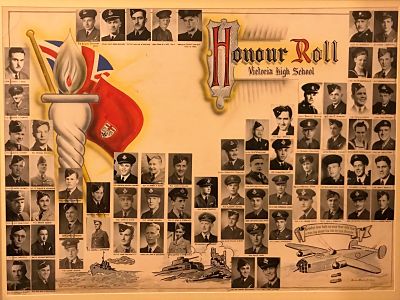 Tomorrow, May 8, marks the 76th anniversary of the end of the Second World War in Europe. In 1944, Superintendent of Schools Ross Sheppard reported that 15% of the teaching staff (43 men and 16 women) of Edmonton Public Schools were on a leave of absence serving with the Canadian forces overseas or doing war work in Canada. In 1945, he reported that there was no loss of life due to wartime activities of any staff member. Sadly, of the 1,400 high school students who enlisted, 115 did not return. The sacrifice of these young men and women is still honoured today. 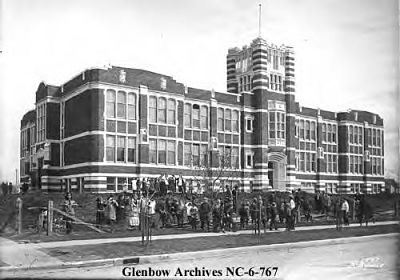 King Edward School: Then and Now

King Edward School opened in 1914. For the first time, the large assembly hall was built on the first floor unlike other schools of the time that had it on the top floor. This allowed for easier use of the hall by the local community. The building had an automatic heat regulator, separate playrooms for boys and girls and “shower baths”.  This last feature caused the Edmonton Bulletin to report “This will be a novelty to many of the children who never before saw hot water come down like rain”. In 1920 King Edward School became the city’s fourth experimental junior high school. The experiment was abandoned in 1925. In 1928, six rooms of King Edward School were rented to the government for teacher training, which operated as King Edward Normal School until 1930. Strathcona Commercial School was also located in the building during the 1920s. King Edward School closed in 1984. 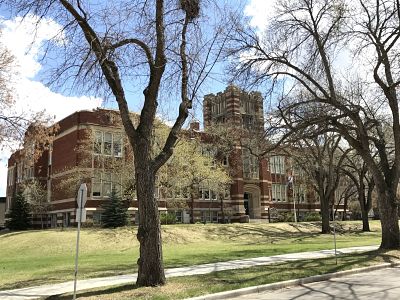 In 1992, it reopened as the Academy at King Edward, which offers specialized programming for students with learning disabilities in Grades 2 to 12. The students are taught, in small classes, to understand their learning strengths and challenges and to develop strategies that allow them to become lifelong learners. 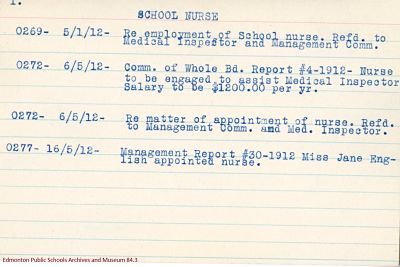 By 1913, when the student population of Edmonton Public Schools had grown to approximately 8000 students, the Medical Inspector was accompanied by two full time School Nurses. The School Nurse salary ranged from $800.00 to $1200.00 per year. At this time, approximately 15 to 20 percent of the student population suffered from “various ailments,” and 30 to 35 percent suffered from “dental defects.”

In 1952, the health services of Edmonton school boards were incorporated into the city health department. 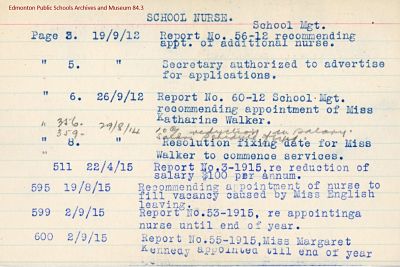 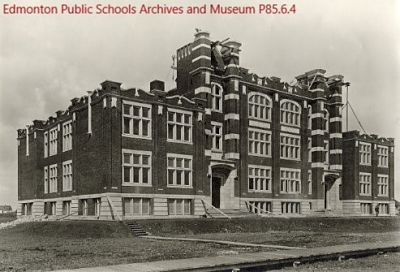 H. Allen Gray (H. A. Gray) School officially opened in the fall of 1914, although classes had started there in May of that year. Like so many of the schools built at that time, the school was on the edge of the city. Most of the sidewalks in the area were wooden boardwalks and the streets were ungraded trails with the exception of 97 Street which was graded and gravelled. 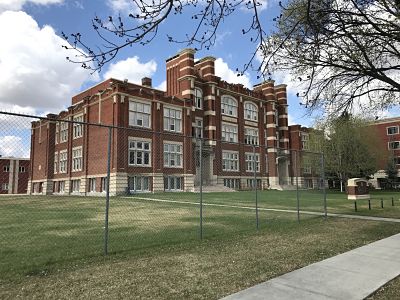 The school closed in 1984 and became the Westwood Campus of NAIT. Since 2004, this beautiful building has served the community as the home of Vanguard College which offers various certificate, diploma and degree programs in Christian education. 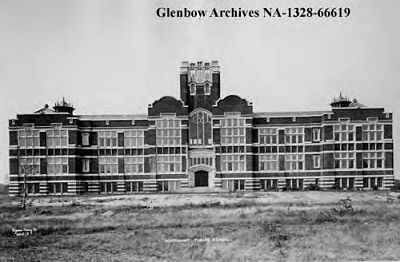 Westmount School is the youngest of our centenarians. Construction began in 1913 but ceased only two months later due to financial difficulties of the Board and a shortage of building supplies. Construction continued intermittently for seven years. The school opened at Easter of 1915 but, like Highlands School, the second floor wasn’t completed until 1920. It became the Division’s first junior high school in 1918. A high school section was opened in 1927 that ran until 1940. In 1936 it became an elementary, junior and senior high school. It reverted to a junior high in 1950. 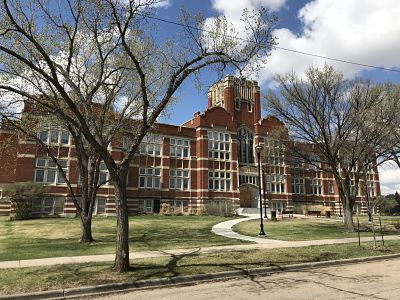 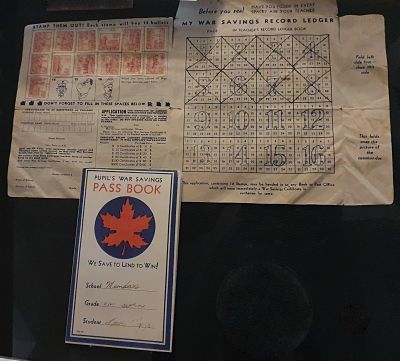 During the Second World War, students in Edmonton Public Schools, and across Canada, participated in many ways to support the war effort. Pass books such as this one recorded a student’s contribution of money for fighting the war. A student could purchase stamps, each worth 25c, and paste them into a pass book. Once the pass book was filled with 16 stamps the student could trade it in for a War Savings Certificate worth $4.00. After five years the certificate could be redeemed at a post-office or bank for $5.00. Loan schemes such as this were used to finance the war. 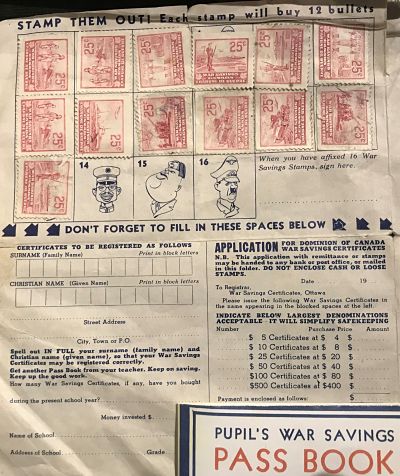 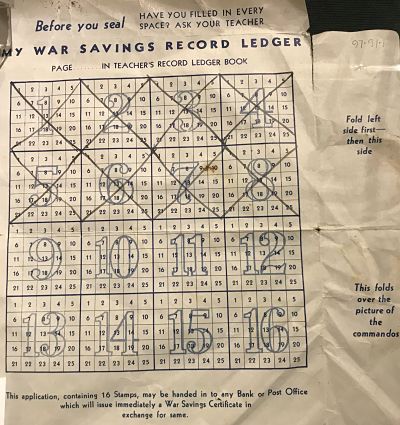 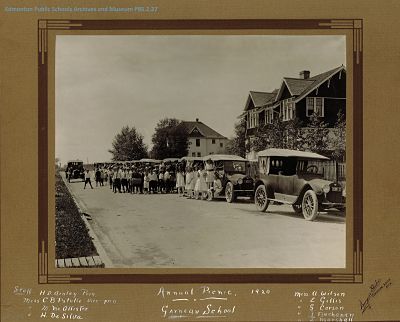 Victoria Day weekend is here! The observance of the birthday of Queen Victoria dates back to as early as 1845 in Canada, but it was in 1901 that May 24th (Victoria’s actual birthday), or “Victoria Day,” became a national holiday. In 1921, it was re-named “Empire Day.” For many years, on the afternoon preceding May 24th, cadet drills and patriotic exercises in story and song were the order of the day in Edmonton Public Schools. Mass rallies of school children would be organized in school yards or parks to perform Empire Day programs. The aim of these activities was to foster a training and attitude that would produce patriotic citizens of the British Empire. Legislation passed in 1952 established the first Monday preceding May 24th as the Victoria Day celebration. 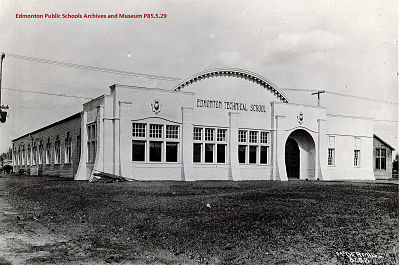 The Edmonton Technical School was established at a regular meeting of the Board on December 19, 1912. The old street railway car barns on Syndicate Avenue (95 Street) and 108A Avenue were chosen to be remodelled to serve as Tech’s first home. On opening day, October 15, 1913, 12 pupils were registered for instruction; however, by the end of 1914 the enrollment was 322. 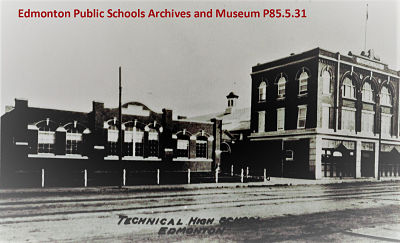 By 1922, a larger building was needed to accommodate the school’s program and on January 3, 1923 classes commenced in the Old Market Building north of 107A Avenue on 101 Street. 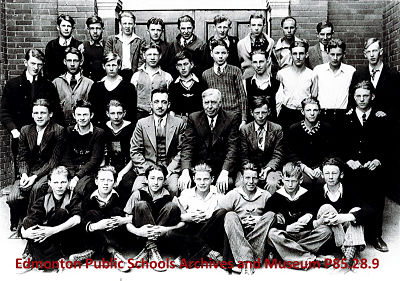 As part of Edmonton Technical School’s contribution to the Second World War effort, model airplanes were built for the airforce and used for aircraft recognition. A letter from #4 Training Command Headquarters (part of the British Commonwealth Air Training Plan) in Calgary congratulated the students on their models and stated that they were of the very best manufacture.  Pictured are students from an Edmonton Technical School woodworking class circa 1935.

Today marks the end of  Asian Heritage Month. Throughout the history of Edmonton Public Schools, many well known and lesser known individuals from various cultures have been educated in our schools and gone on to play a valuable role in our city, province and country. One such person is Bing K. Mah who came from China in 1922 at the age of 10. He was a student at Alex Taylor School and was one of the first fully bilingual individuals of Chinese descent in Edmonton.

Throughout his life, Bing Mah worked as a tireless volunteer - as an interpreter for Immigration Canada and Canadian Pacific Airlines, assisting immigrants with visas and passports, organizing fund-raising for the Canadian War Bond program - the list goes on.  He was the first Chinese businessman to become a Rotarian in Edmonton where he continued to volunteer his time for 50 years. On May 3, 2004 Bing Mah was included in the list of 100 Edmontonians of the Century.

We appreciate the support of Mr. Mah’s family and the Chinese Benevolent Association for their permission to use his photo on our website.