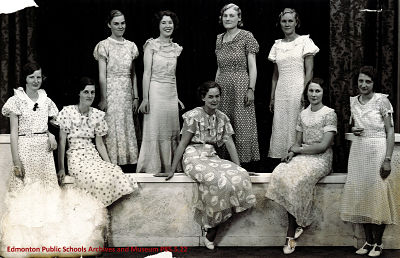 Night school courses were extremely popular with a wide range of courses being offered. Some academic high school subjects were offered in the evening as well. English for new Canadians was also taught. Tuition fees ranged from $2 to $4 per course depending on the number of times the subject was offered during the 10 week term. Pictured are Tech students modelling dresses designed in night classes. 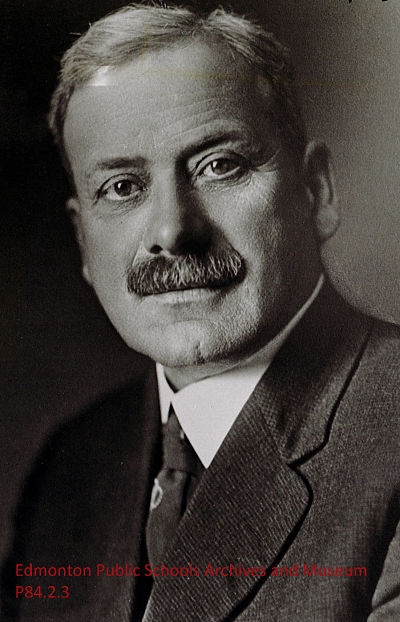 In its 140 years, Edmonton Public Schools has had 13 superintendents. The first superintendent was James McCaig who served from July 20, 1906 to October 31, 1913. Ten permanent schools were built during the seven years that he served and five more were nearing completion at the time of his resignation. Superintendent McCaig was a progressive thinker in terms of educational philosophy. He stated that “The ultimate end of school work is character building”. He proposed expanded household science, music, and physical education classes in the belief that a richer curriculum would help keep pupils in school. 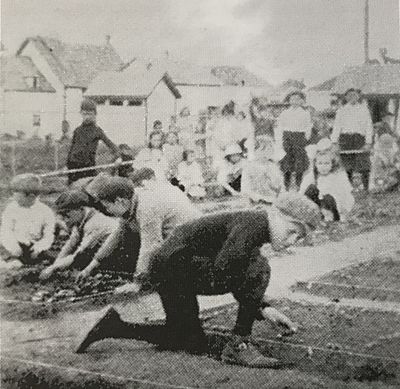 The first full week of June is National Garden Week. During World War One, the teaching of agriculture and nurturing of school gardens were both educational and patriotic thrusts. Pictured are students in the school garden at Donald Ross School in 1915. 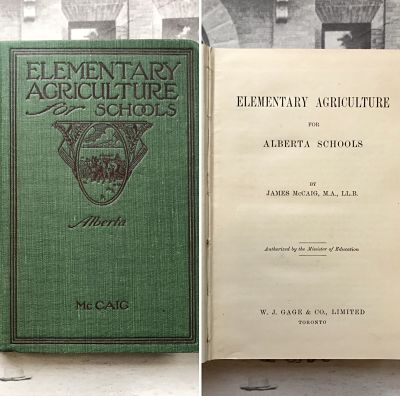 A newly authorised text book written by former superintendent James McCaig, and special summer school programs for teachers wishing to teach the new course, helped promote interest in the subject. Before the end of the war, most schools had gardens of their own. 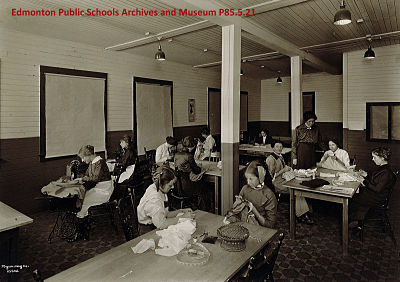 Edmonton Technical School offered many courses for girls and women. Pictured are students taking part in sewing and cooking classes as well as a Domestic Science demonstration at the Edmonton Exhibition. 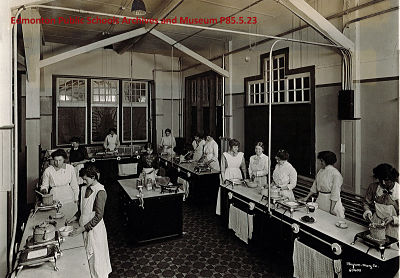 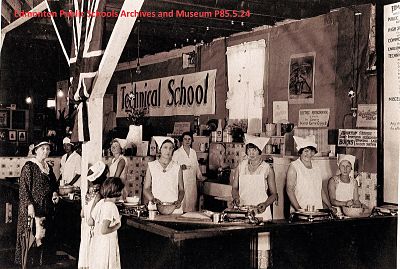 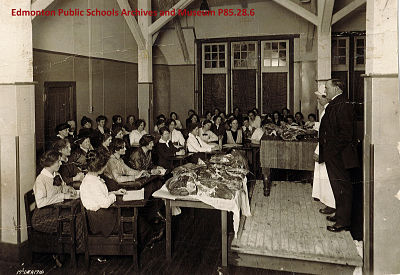 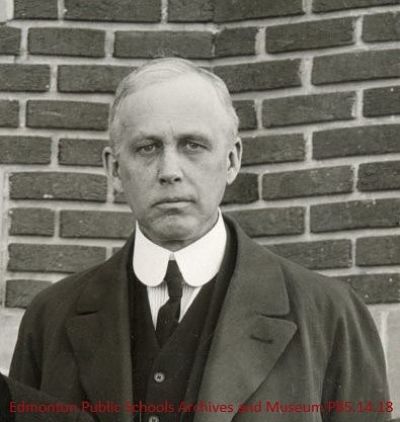 William G. Carpenter was our second superintendent. He served in this role from 1914 - 1923. At the time of his appointment, Mr. Carpenter was principal of Victoria High School. One of his first tasks as superintendent was to introduce a night school program for new Canadians. Throughout the First World War, Mr. Carpenter kept in close personal contact with most of the staff members who were serving in the military overseas.

Unlike his predecessor, James McCaig who used a horse-drawn rig for transport, Superintendent Carpenter used his automobile, which he purchased in 1919, when making school visits. In 1921, he applied to the Board to cover the cost of new tires, explaining that he had already spent $143.10 on tire repairs and that he used the car almost entirely for work. His request was denied however his travel allowance was increased to $35/month.

Carpenter left his position as Superintendent of Edmonton Public Schools to become principal of the Provincial Institute of Technology and Art in Calgary. He later became Alberta’s Provincial Director of Technical Education. 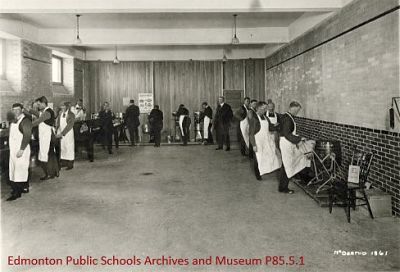 Edmonton Technical School offered a wide range of trades courses for boys and young men. There were courses in machine work and tool making, auto mechanics, blacksmithing, printing, mechanical and architectural drafting and sheet metal. Night school courses included many of the day courses as well as coal mining and steam engineering. Pictured are a buttermaking demonstration and the forge and blacksmith shop. 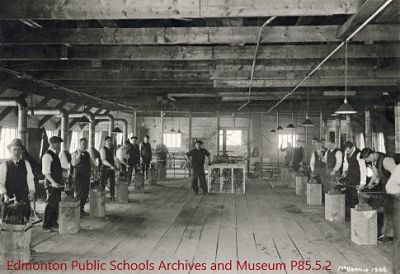 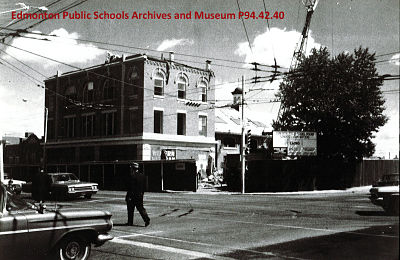 Edmonton Technical School saw a drastic decline in enrolment during the first years of the Second World War. In 1943, the Department of National Defence requested the use of the entire school for the Emergency War Training Program. After the war, the school was used for refresher courses for ex-servicemen preparing for university enrollment. In 1947 it was returned to Edmonton Public Schools and used mostly as a warehouse. A few shop classes continued for a short time but these were closed when the new Victoria Composite High School was opened in 1949, absorbing Tech as well as McDougall Commercial students.

Pictured are photos of the demolition of the building in June and July of 1966. 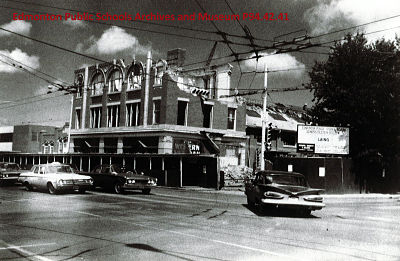 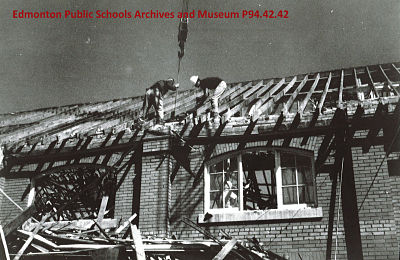 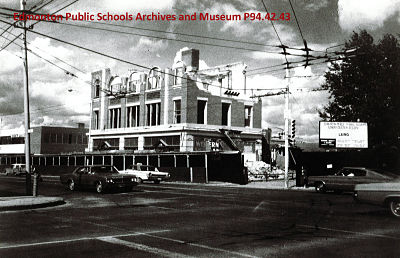 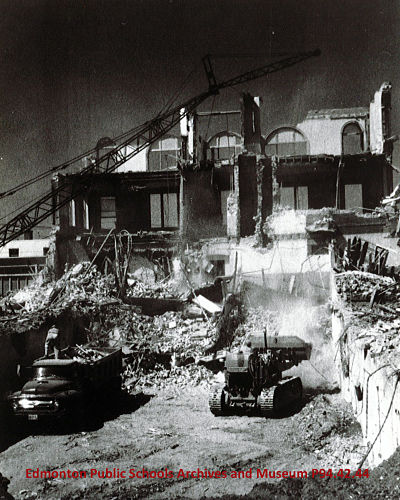 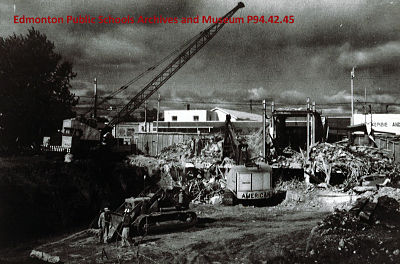 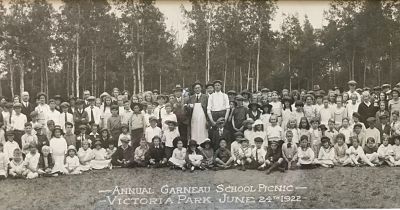 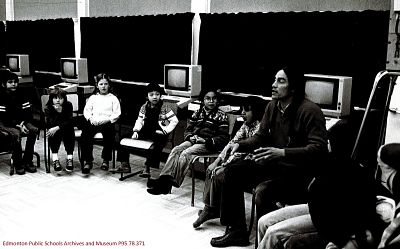 Today is National Indigenous Peoples Day in Canada. This day gives us a chance to recognize the many achievements of Canada’s Indigenous peoples and celebrate the distinct cultures and unique traditions of these FNMI communities.

At two Edmonton Public Schools sites, there is a focus on teaching knowledge and honouring of Cree language, values, ancestral knowledge and traditions. At Prince Charles School, children from Kindergarten to Grade 6 are enrolled in the Awasis program (Awasis is Cree for child). This program began in 1973 through the efforts of parents and Edmonton Native rights activist Jenny Shirt Margetts. Awasis became part of Edmonton Public Schools in 1974. Pictured is Mr. T. Alcoze with a class sitting in a circle circa 1990.

In 2000, amiskwaciy Academy opened for students from Grade 7 -12. Most students come from Edmonton and surrounding areas but also First Nations and Metis settlements throughout Western Canada and the Northwest Territories. Although most students are First Nations, Metis or Inuit, students of all cultures are welcome. amiskwaciy is what the Cree people called the area that is now Edmonton. In English it means “Beaver Hills House”. The amiskwaciy Academy’s logo reflects the traditional beliefs of the medicine wheel and is featured in the second photo. 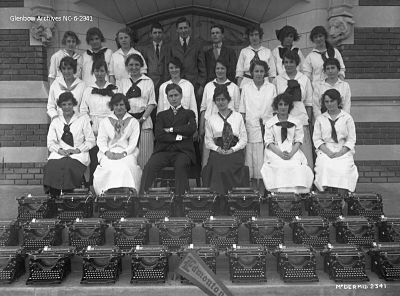 In celebration of National Typewriter Day we bring you the McDougall High School Commercial Class of 1916 posing in front of their typewriters. Their teacher, J. Percy Page, is seated in the front row. Students who intended to pursue a business career could receive instruction and practice in office training at McDougall Commercial High School. 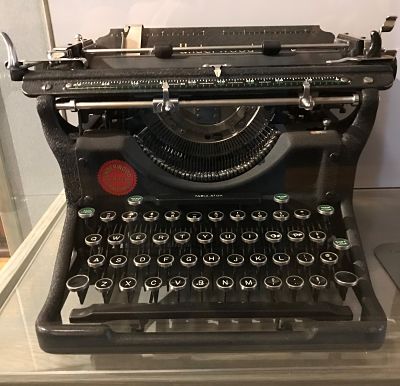 This is a 1926 Underwood Typewriter, similar to the one seen in the class photo. 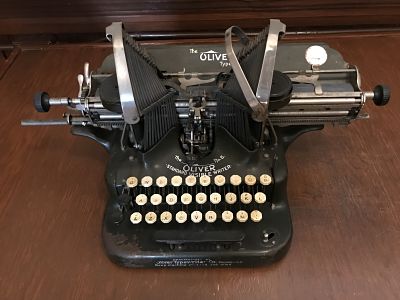 This is the oldest typewriter in our museum: The Oliver No. 5 from circa 1908. 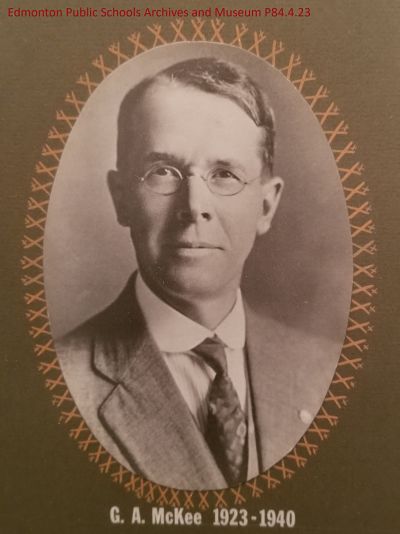 In 1924, George McKee was appointed as the third Superintendent of Edmonton Public Schools. He remained in this capacity for 17 years until his retirement in 1940. Periods of stability, depression and financial cutbacks were experienced during his tenure.

In his first year as Superintendent, McKee participated in opening ceremonies for three new schools: Garneau, Riverdale and Frank Scott (later renamed Eastwood). He is well remembered for his patience and praiseworthy achievements. Mr McKee was well liked by the teachers and remarkably few teachers resigned or left the Division during his time as Superintendent. 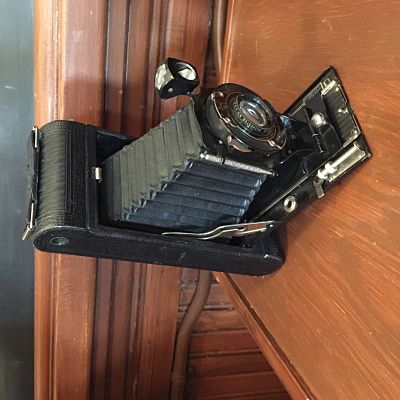 Tomorrow is National Camera Day. From May 1 to May 30, 1930, the Eastman Kodak Co. gave away 550,000 cameras to children in the U.S.A. and Canada whose twelfth birthday fell in 1930. The child, accompanied by a parent or guardian, simply went to an authorized Kodak dealer to receive the free camera, a Kodak No. 1A (pictured), plus a free roll of film.

Two stated purposes of this mass giveaway were:

2) To further promote the popularity of amateur photography

Several Division students were able to receive cameras as part of this campaign. 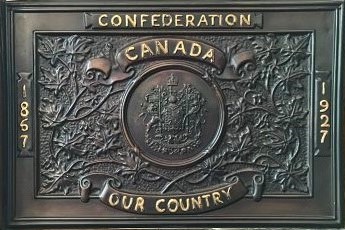 Tomorrow we celebrate Canada Day. Perhaps this is a good day to reflect on the contributions of the people: from the original inhabitants, the Indigenous, all the way to the latest refugees and immigrants, who have helped to create the fabric of this country and what we have to be proud of. It is also a good day to recognize the things that we as Canadians can and should do to make it an even better nation.

The plaque featured in the first picture was presented to most schools in Canada in 1927 to mark 60 years of confederation. 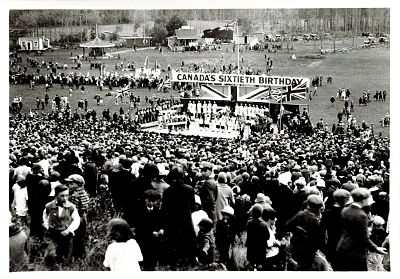 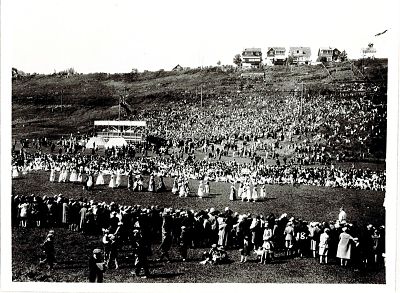 The edge of the river valley in the third picture is certainly much different than today!