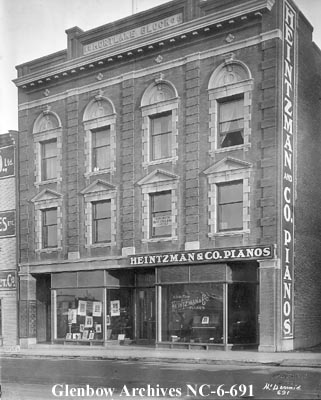 In 1906, Superintendent James McCaig became the first full-time official of Edmonton Public Schools and a room was rented in the Edmonton Bulletin building to serve as his office. For the 24 years prior to this, the part-time Secretary-Treasurer carried out his duties from his private business office and the Board met in various places - sometimes in the office of the secretary-treasurer, or in the schoolhouse - even in the homes or private offices of the Trustees. In 1907, they moved across the street to three rooms in the Archibald Block and then in 1909 to an entire floor of the Mortlake Block (pictured). 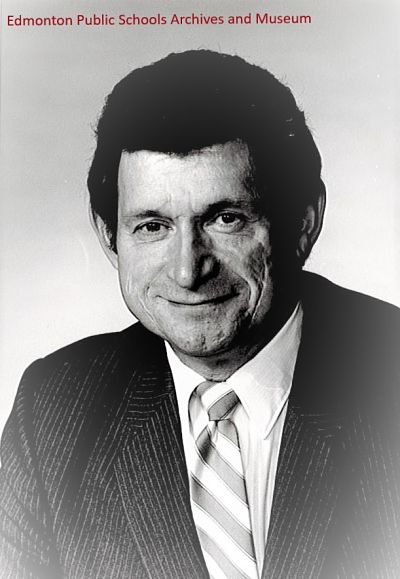 Michael Strembitsky began his career with Edmonton Public Schools in 1956 as a teacher at Crestwood School.  On January 23, 1973 he was appointed as the eighth Superintendent of Schools.  He is probably best known for implementing school-based budgeting and management which allowed individual schools to make their own decisions on what was needed, based on the budget provided. Edmonton Public Schools was the first large school division in North America to adopt this approach. He also changed the system of closed boundaries to open boundaries allowing parents true school choice and introduced a range of alternative and second language programs. The system that Dr. Strembitsky introduced has been copied around the world.  Time Magazine, in its October 13, 2003 issue, referred to Edmonton Public Schools as “the most imitated and admired school system in North America.''

In May of 1994, Mr. Strembitsky resigned to take a position with a Washington, D.C. “think tank” promoting reform and restructuring of school districts in the United States.

In August of 2016, the Edmonton Journal reported that Mr. Strembitsky, at the age of 81, had been hired by Nevada’s Clark County School District to oversee the overhaul of their district. 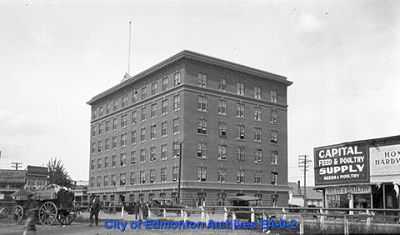 In 1915, the Division offices moved from the Mortlake Block to the fifth floor of the Civic Block (pictured), where space was rented for $250 per month. This location was used until 1947 when the rapid growth of the city, following the discovery of oil in the Leduc area, made it necessary to find larger quarters. After some investigation, the various departments of the administration were divided and housed in Victoria School, McKay Avenue School, and the old Technical School buildings until the mid 1950s. 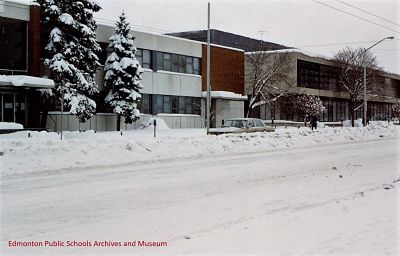 In 1956, construction began on the first permanent office space for the Division (portion of building left of car in the photograph). The site of the new Administration Building was on 101 Street and a half block north of 107A Avenue (which was previously occupied by the old Technical School). The new building would support the new central organizational structure. 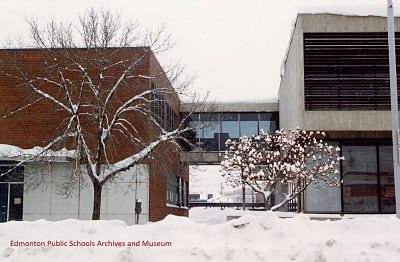 In 1967, a large addition was completed (right of car in first picture), connected by a pedway to the 1956 structure. 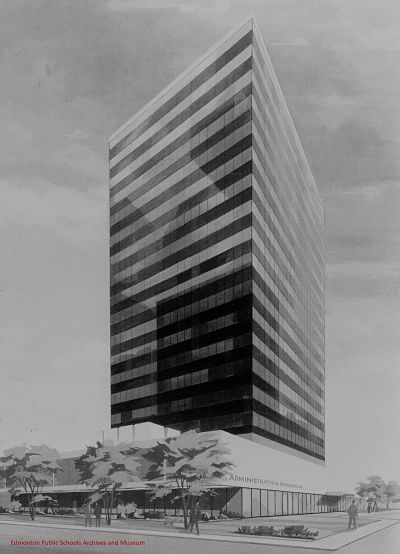 According to the architect’s rendition this addition was to include a sixteen-storey office tower to meet the future needs of Edmonton Public Schools. This tower was never seriously considered as it would have interfered with air approaches to the municipal airport. 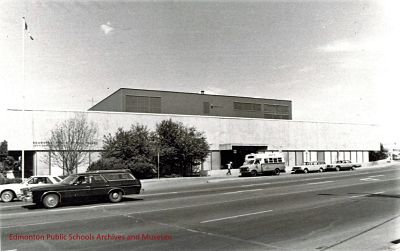 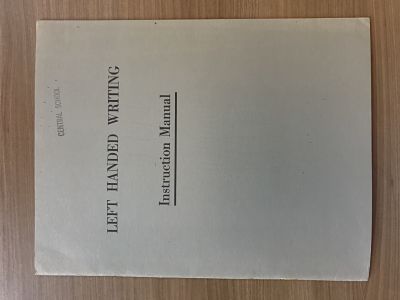 Up until the 1950s, writing with one’s left hand was frowned upon and in many classrooms forbidden. By the 1950s this attitude was changing. Manuals on providing writing instruction to left-handed students were made available and in early 1950, Edmonton Public Schools purchased 100 left-handed desks in an experiment to aid left-handed students. These desks more than proved their value in aiding to the posture and penmanship of the students who used them. The purchase of an additional 350 left-handed desks was approved in July of 1950. 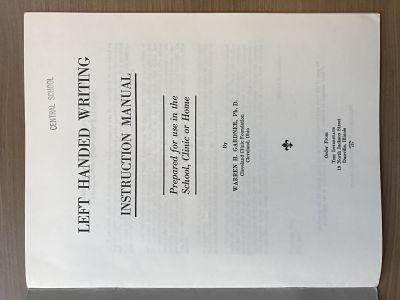 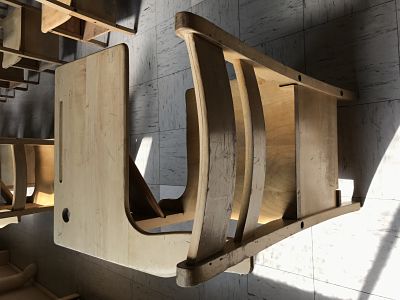 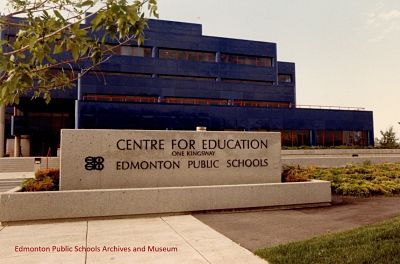 By 1980, the Administration Building was not meeting the needs for the Division’s offices. Plans for a new and larger administration building were announced in 1980 after it was decided that the costs were not practical to renovate and upgrade the existing offices. On September 28, 1984, the Centre for Education, or “Blue Building'' as it has been nicknamed, was opened. Thanks to the vision of then Superintendent Michael Strembitsky, who was involved in the planning of the building, it continues to meet the needs of Edmonton Public Schools. 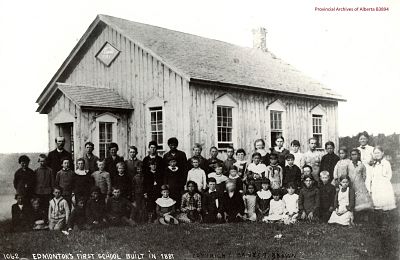 This picture, taken in 1886, is the oldest known photograph of an Edmonton Public School. It shows the teacher, Mr. W. H. Carson with his class of 51 students. Students were a wide variety of ages and older students would help teach the younger students. You can use the second picture and the list below to identify almost all of the students. We’re sure you will recognize many of the surnames! 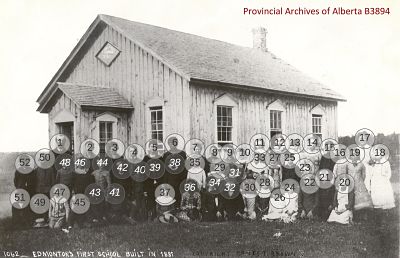 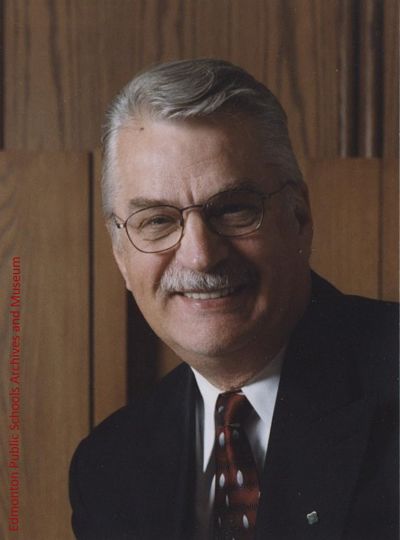 Emery Dosdall became our ninth Superintendent of Schools on January 1, 1995. He came to this position at a time of great economic difficulty. Division funding had been cut by the provincial government by 12.4% and school boards had lost their authority to assess local property taxes. Full funding for charter schools had also been established by the provincial government. Mr. Dosdall successfully met this challenge by greatly expanding alternative programming choices throughout Edmonton Public Schools. He retired from Edmonton Public Schools in 2001 to become Deputy Minister of Education for British Columbia. 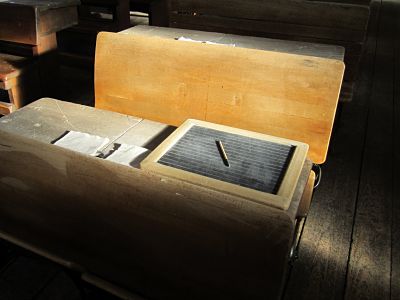 Back to school means studying lengthy school supply lists and making purchases. This aspect of life was perhaps much simpler when our first school opened in 1882.  An item in the Edmonton Bulletin of Saturday, December 31, 1881, reminding parents of the opening of the school, contained the following sentence: “Books, slates, etc., should be got in readiness beforehand.”

Slates were used in Edmonton Public Schools until the early 1900s. Students were not permitted to use paper until their fourth year as paper was very expensive and in short supply. 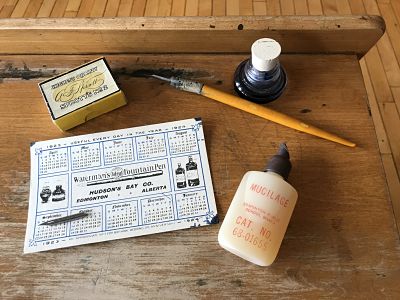 In the early years, Edmonton Public Schools provided students with school supplies. This included exercise books, pen holders and nibs, ink, ink blotters, pencils and mucilage (glue). Pictured are some of the supplies students would have received. The High School Exercise Book in the second photo belonged to a student at Strathcona High School. It came from E. N. Kennedy Co. School Books & Supplies, Edmonton, Alta. In March 1921, the Board passed a resolution that school supplies, with the exception of “exam. cap., ink, pen points, pen holders, chalk and blackboard erasers,” would be furnished to grades one and two only. 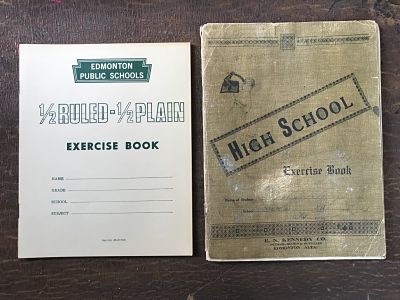 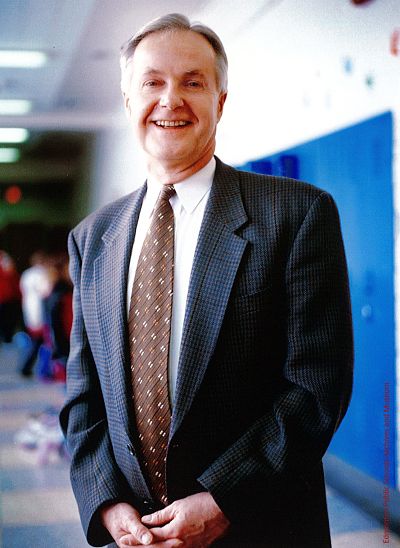 Having served as Acting Superintendent from May 1, 1994 to December 31, 1994, Angus McBeath became the tenth Superintendent of Edmonton Public Schools in 2001. He was the seventh Superintendent to have risen through the ranks of our school system, having started in 1976. His focus as Superintendent was on improving student achievement as well as teacher and principal performance and accountability. He retired on October 31, 2005 but continued to serve public education through speaking and consultant roles. 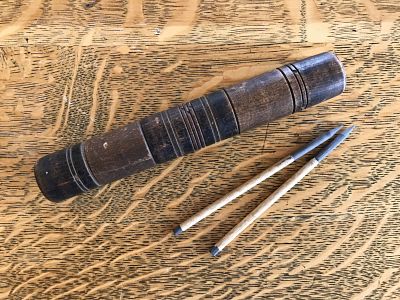 Students of today would have a difficult time fitting all their markers, pens, etc. into a pencil box used by an Edmonton Public Schools student in the past. Pictured are a variety of pencil boxes used by students even as recently as the 1960s.

This case is over 100 years old. The cylindrical container was designed to hold the slate pencils, which were quite fragile and needed to be handled with care. 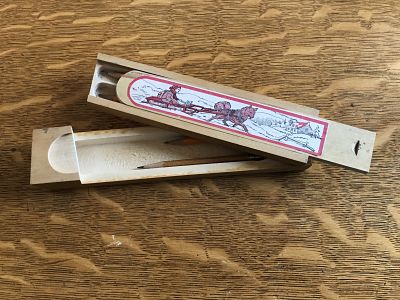 A common pencil box had two decks. The lid would slide back and the top deck would swing out to allow access to the bottom deck. Many were decorated with a nursery rhyme or scene. 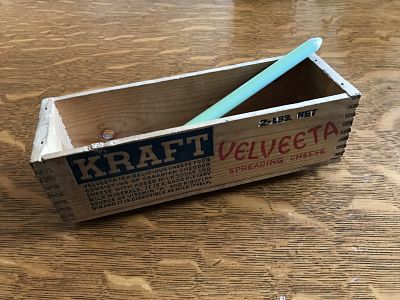 A budget-friendly, simple solution was a small Kraft cheese box. 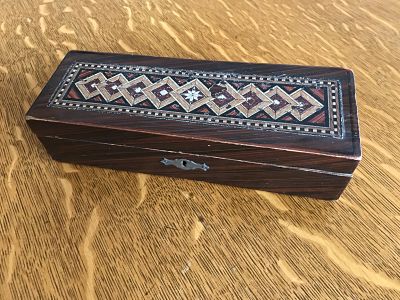 A more elaborate option was a “Wood-inlay” box like this one. Manufactured in Brazil, it is inlaid with seven different types of wood.