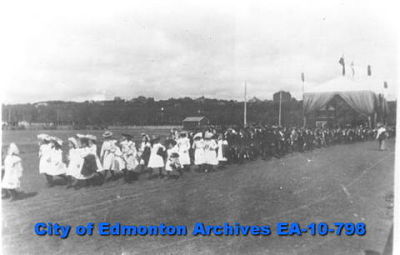 On September 1, 1905 the Province of Alberta was inaugurated in a ceremony that took place at the Exhibition Grounds. At that time, they were located in Rossdale. Pictured are students from McKay Avenue School taking part in the children’s parade that was part of the day’s events. McKay Avenue School is the tallest building seen on the edge of the river valley. 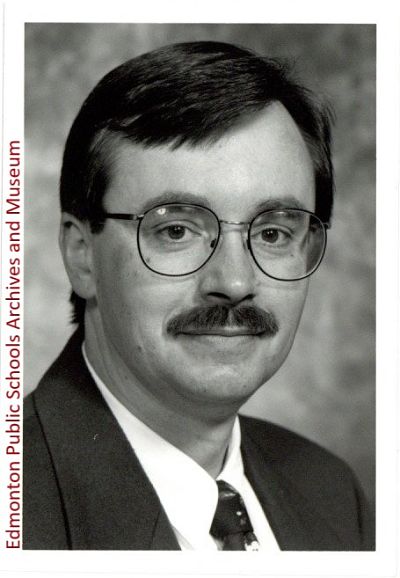 It would appear that a school picnic was a “beginning of school” activity at one time. This photo entitled “At Edmonton School Picnic, Sept. 5th,’03” was taken by C.M. Tait. It is a fine example of children’s clothing at the time. 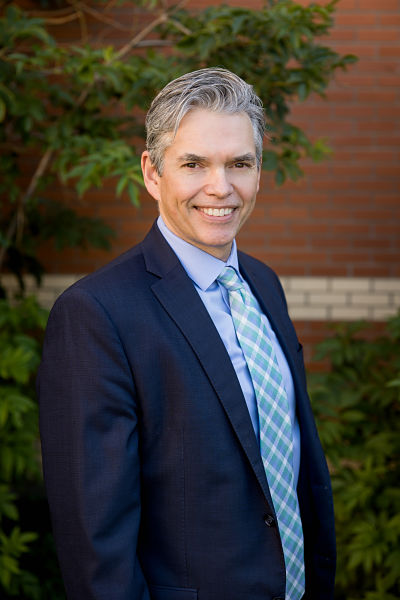 Darrel Robertson became the 13th Superintendent of Edmonton Public Schools on August 12, 2013 and continues to serve in that role. Some of his accomplishments to date include the establishment of an equity fund to help schools respond to the unique needs and challenges some students face as well as Career Pathways, an initiative that allows students from Kindergarten to Grade 12 to develop skills needed for the future. On July 7 of this year, Darrel Robertson was named Canadian Superintendent of the Year by the Canadian Association of School System Administrators. 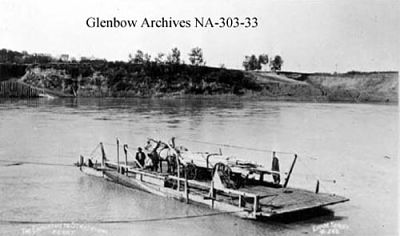 Today, many Edmonton Public Schools’ students arrive at school on a yellow school bus. In the early days, walking was the major “form of transportation” for students. As there was no school on the south side of the river until 1892, students of what was then called the Village of South Edmonton had to cross the North Saskatchewan River in order to attend the Edmonton School. In the summer they would use John Walter’s ferry. In the winter they would walk across the frozen river. In early autumn and late spring, when the ferry was nonoperational and the ice was unsafe to walk on, students of the south side would have a “vacation”.

On September 9, 1952 a delegation from the Buena Vista district appeared at the Board meeting to request that the Board provide transportation for children of the area as they had to travel three miles to Garneau School. The newspaper the following day reported that one Trustee pointed out that Edmonton Public School Board had never made a practice of providing transportation and that similar requests had been refused in the past. The Buena Vista request was also denied. The delegation from Buena Vista worked with City Commissioners and at the October 7, 1952 Board meeting, bus service to Jasper Place and Glenora School for children residing in Buena Vista was approved. The Department of Education would provide a grant of $6 per day to be paid to the Edmonton Transit System as their cost for the operation of the bus service. 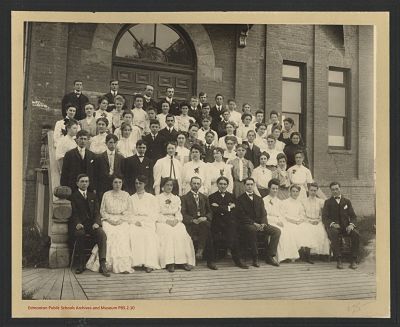 In Fact #26, we reported that College Avenue School was used exclusively for high school classes from 1903 - 1911. Prior to this, it had been used to accommodate younger students as well.

At this time, students were organized by Standards and spent two years in each Standard (except Standards 5, 7 and 8 which were each a year). There were five Standards at the public school level and three at the high school level.

As a side note, Grades 1-8 were called “public school” and Grades 9-12 were called “high school”. It was in 1936 that the 6-3-3 organization was implemented and the terms elementary, junior and senior high school were used. 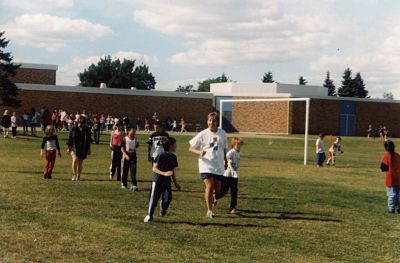 This year is the 40th Anniversary of the Terry Fox Run. The first run was held on September 13, 1981. The following year, schools were invited to participate with their own events. Students of Edmonton Public Schools have been participating in this run since its inception. Pictured are students from Princeton School participating in their Terry Fox Run in 1999. 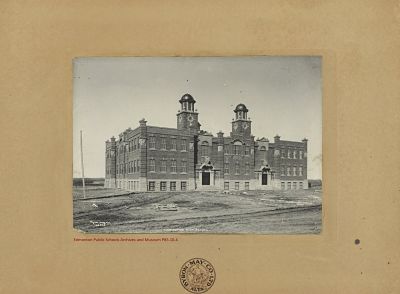 The first school built exclusively for high school students in Edmonton opened on May 11, 1911. Edmonton High School had twelve classrooms, a science laboratory, library, main floor auditorium and sub-basement gymnasium. In addition to regular academic subjects, students could choose from art, physical culture, manual training, domestic science and some commercial courses. The name of the school was changed to Victoria High School in 1913. In our next three posts, we will follow the journey of Victoria High School to what is known today as Victoria School of the Arts. 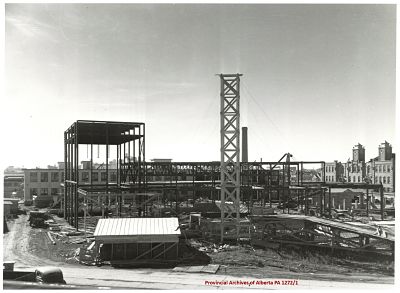 In the mid 1930s, students could still choose to attend a specific type of high school (regular, commercial or technical) according to their aspirations, aptitudes and interests. Major changes to the curriculum led to the provincial move to organize composite high schools. These would offer a diverse high school program to all students, within a single setting.

A composite high school became firmly entrenched in Edmonton Public Schools when the first unit of the new Victoria Composite High School officially opened in 1949. Although planned in the late 1930s, construction had been held up due to the shortage of structural steel. 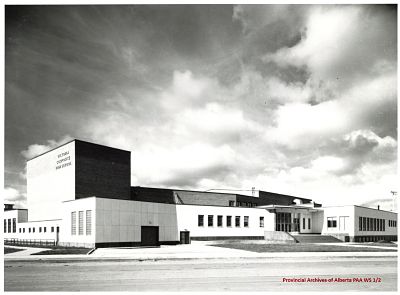 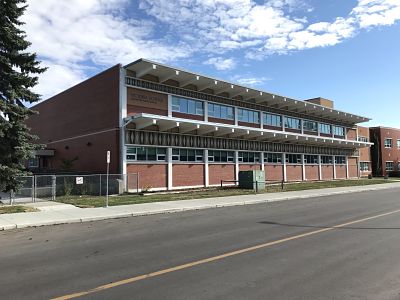 On April 19, 1962, the students of the “red building” (the original 1910 building) were informed that the old school was being demolished to make way for a vocational school. The federal government would provide up to 75% of the cost of the new facilities and equipment should the building be completed by March 31, 1963. Victoria Vocational High School was completed on time and opened in September 1963.  Although it initially operated separately, in 1965 the Board amalgamated the two units as Victoria Composite High School.

David Murray described the 1963 addition as a Structural Expressionist Style of architecture, with the use of decorative mosaic spandrel panels, as well as the expressed structural grid and continuous sunshades. These details are clearly evident in today’s photograph. 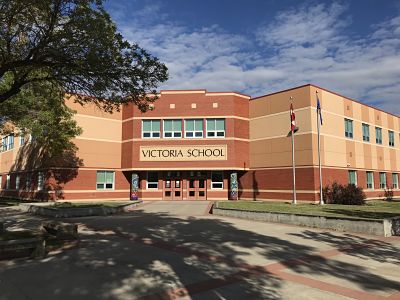 Victoria School of the Arts

In the late ‘60s and early ‘70s the student population of Vic Comp fell dramatically and subsequently courses were dropped, particularly in modern languages, music and performing and visual arts. Again, Vic opened her doors to new types of students. Some were adults who came as day students to the Continuing Education Centre, formerly the east academic wing of the composite high school. Trades and Services students, who needed special types of education, also enrolled at the school.

In the late 1980s Victoria Composite High School, under the direction of Principal Bob Maskell, was transformed into a school focusing on the performing and fine arts. It was renamed Victoria School of Performing and Visual Arts and operated as a kindergarten to grade 12 arts-based alternative school.

In 2011, following the completion of a major modernization, the name of the school was changed to Victoria School of the Arts. It is regarded as one of the top arts based schools in North America. 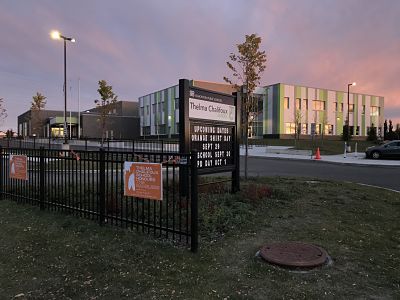 Throughout history, Indigenous peoples have played significant roles in shaping this country. When Mee-Yah-Noh school opened in 1961, for the first time Edmonton Public Schools used a term from the Cree language to name a school. Since then, the names of several schools have used Cree words or expressions. More importantly, in the past five years, three new schools have been named after Indigenous women in recognition of their valuable contributions to Indigenous people and Canada. The most recent of these is Thelma Chalifoux School which opened in September 2020.

Here is a list of all Division schools with Indigenous names, the year they opened and the English translation: